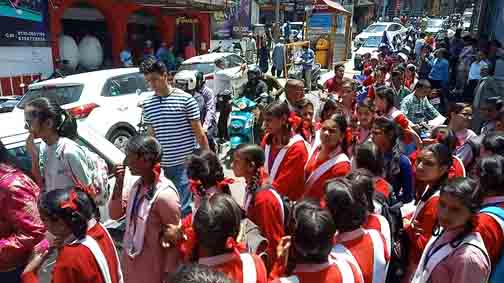 By Sunil Sonker
Mussoorie, 5 Jun: On World Environment Day, today, a special cleanliness and tree plantation drive was organised by the Sant Nirankari Charitable Foundation, here. The message was to keep the environment free from pollution. This was followed by a tree plantation done by Mata Sudiksha  Maharaj in the premises of the Garhwal Mandal Vikas Nigam. A huge awareness rally was taken out from Mullingar Chowk to Gandhi Chowk, with slogan being raised on preserving the environment and not using plastic bags. Officials of the ITBP, forest department, Mussoorie Municipal Council and students of various school participated in the rally under the leadership of Mussoorie SDM Gopal Ram Binwal.
The speakers on the occasion emphasised that maintaining ecological balance was the need of humankind today. Global warming was threatening the Ozone layer, which impacted all living beings. They urged every citizen to come forward and contribute to tree planting and cleanliness at least in their own surroundings. Mussoorie MLA Ganesh Joshi appreciated the initiative and the contribution made by the Nirankari Foundation. He thanked Satguru Mata for blessing and inspiring devotees to participate in this most important campaign. He called upon every citizen to ‘save trees – save life’.  He said that Mussoorie had been known as the Queen of Hills and the Nirankari Mission had contributed not only to beautifying the city but in other social welfare activities also.  He appreciated the contribution of the Mission to health services round the year and in traffic control during the tourist season. Present on the occasion were Mussoorie Palika Chairman Anuj Gupta, EO ML Shah, Naib Tehsildar Pooran Singh, Virendra Bist and many others.