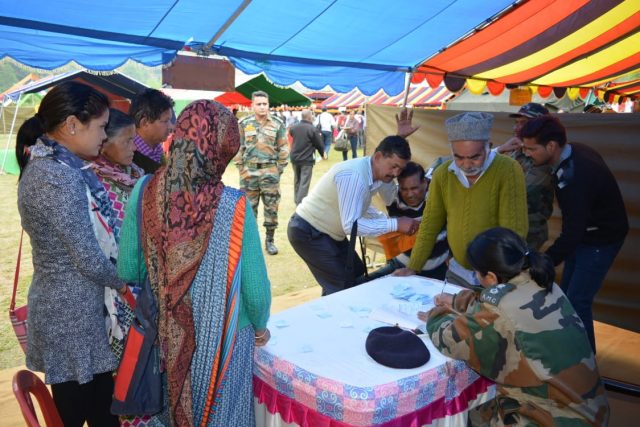 By OUR STAFF REPORTER
Dehradun, 18 Apr: An Ex-Servicemen’s Rally cum Medical Camp was organised at Chaukhutia, District Almora, on 17 April by Garud Division of Surya Command.
The rally received an overwhelming response with a large number of veterans, Veer Naris and widows participating in the event.
The highlight of the rally was the inauguration of the Chaukhutia Ex-Servicemen’s Canteen by Major General Manoj Kumar Katiyar, General Officer Commanding (GOC), Garud Division.  Various departments of the Armed Forces as also civil administration put up stalls at the rally site, which helped create awareness amongst the veterans, Veer Naris and widows about the various welfare measures being instituted.
Major General Katiyar felicitated the veterans and Veer Naris. Six mobility equipment (Scooties) were also presented to disabled soldiers. The General Officer Commanding, during his speech, thanked the Ex-Servicemen and Veer Naris for their contribution and sacrifice for the Nation.
The veterans thanked the Army for taking the initiative and opening the canteen, which was a long pending demand of the veterans and Veer Naris of five blocks of Almora and Gairsain blocks of Chamoli district. Senior military officers, retired Armed Forces officers and important civil dignitaries were also present during the rally. Extensive arrangements were made by the Garud Division to assist veterans in redressal of their grievances.
A medical camp also formed part of the rally wherein services of various medical specialists and medicines were provided to the veterans and their families.
A cultural programme by troops of Congo Brigade and folk dance by school students added colour to the event.

Garhwal Post has established itself as a credible, balanced and forward looking newspaper in India. Based in Uttarakhand, the daily is read by the aware, socially and culturally responsible, high-income elite of society.
Contact us: info@garhwalpost.in
free foreign dating sites