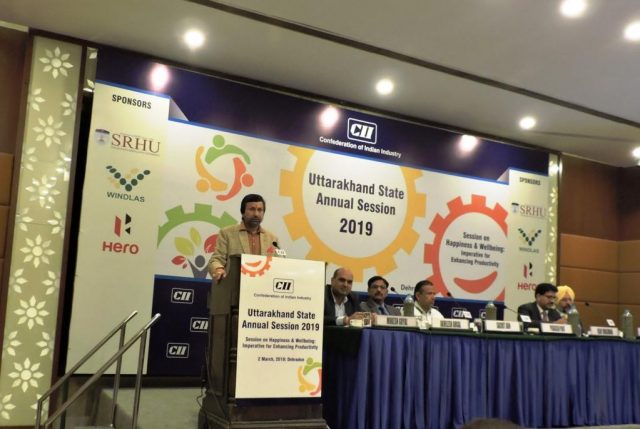 By OUR STAFF REPORTER
DEHRADUN, 2 Mar: “One can experience extreme happiness by helping others”, said Prakash Pant, Minister of Finance, while addressing the gathering as the Chief Guest at the Inaugural Session of the CII Uttarakhand Annual Session today.
He also shared that happiness comes from within and even the ancient civilisation was dependent on Yoga, Meditation and Ayurveda to live a healthy and a positive life. The theme of the Session was “Happiness & Well-being: Imperative for Enhancing Productivity”.
Dr Vijay Dhasmana, Chairman, CII Uttarakhand State Council, while delivering his opening remarks, shared that development of any society was dependent on the happiness and wellbeing of its people. He further stated that being happy was the key to everything. Happy people were more productive and it was high time for the Government and Industry to realise the importance of happiness and wellbeing of the people. India needed to move up from its 133rd rank among 156 countries on the World Happiness Index 2018.
Sachit Jain, Chairman, CII Northern Region, in his theme address, shared that a happy workforce was a proud workforce, and a proud workforce delivered excellent results, which made businesses flourish. He opined that Industry nowadays was well aware of having healthy and happy teams and was working towards various well-being initiatives. Jain, later, urged the State Government to set up the Department of Happiness on the lines of Madhya Pradesh utilising the state’s strength in Yoga Science among other aspects.
Akhilesh Argal, CEO, Rajya Anand Sansthan, Government of Madhya Pradesh, shared that MP was the first State in the country to have such an institution established in 2016. The department was set up to work proactively towards the subjective well-being of the citizens, even as the material needs continue to be addressed. He disclosed that Anand Sansthan had over 48,000 voluntary workers and had a process of online registrations. The institution was working towards improving the Happiness Index with IIT Kharagpur as knowledge partner and a resource centre for happiness. The institution organises the Anand Utsav – an Annual Festival of Joy in the month of January and, so far, it has been organised at 8000 locations in Madhya Pradesh.
The panel discussion was organised to share with industry that it was important to create a conducive environment for employees and creating a happiness culture that would would improve performance and growth.
Karan Behl, Founder & Chief Happiness Officer, Happiitude, shared that there were five elements that led to happy employees – Self Expression, Sense of Control, Sense of Growth, Purpose and Communication.
Nina Chatrath, Founder, Enhance Consulting, stated that keeping the profitability intact, a conducive environment could be created by corporations for their people to be more productive. She further stated that, if leadership of any organisation felt for its people, happiness will prevail.
The sessions were well attended by over 125 delegates from Industry, Institutions, Government, Academia, NGOs & media.