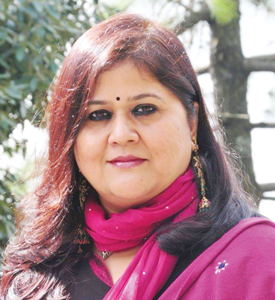 Dr Anjali Nauriyal began her journalistic career over 21 years ago as Editor of one of the first regional English monthly magazines of Uttarakhand. She also served as Associate Professor at the Indian Military Academy, and later pursued her love for journalism by conceptualizing a supplement titled Times of Doon for the Times of India Group.

She has been Member of the Reconciliation Bureau of the Uttarakhand Police, Member Citizens’ Pressure Group, and also served as Secretary of the Dehradun Chapter of SPIC-MACAY.  She has also been Fellow of the Ministry of Culture and has researched on many cultural issues.

She has received several awards for her contribution to journalism including the GIAN Award for grassroot augmentation in 2005 by Mashelkar, UMA SHAKTI SAMMAN 2009 for exemplary work and popularity in field of social service through journalism, Indian Medical Association Award for contribution to society, Raj Rajeshwari Samman by PHD Chamber and Uttarakhand Government. Outstanding Journalist by Punjabi Sabha and Comrade Kamla Ram Nautiyal Sanstha Uttarkashi Samman, Chief Minister’s Award for Excellence and Garhwal Post Award for Excellence 2016, Pride of Uttarakhand by Doon Citizen’s Council, Uttarakhand Ratan by All India Conference of Intellectuals, Daughter of Uttarakhand by Garhwal Post, Media Federation of India Award, etc.

Currently she is working with Garhwal Post as Features Editor.

Her maiden book titled ‘Retelling of the Folk Ballads of Garhwal’ has become a regional best seller.