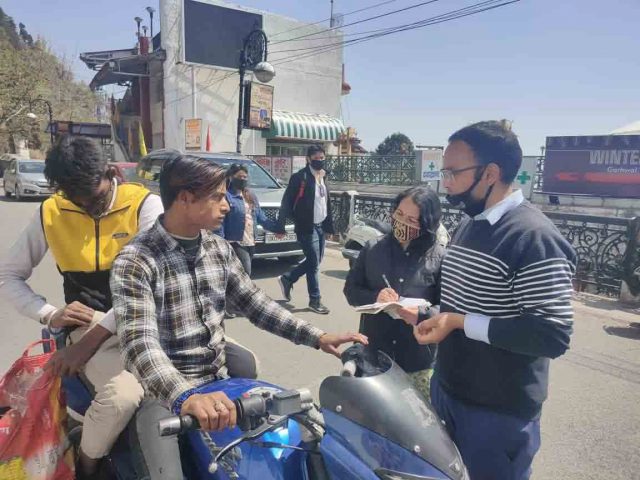 Mussoorie, 4 Apr: The activities undertaken under the Swacch Bharat Mission campaign, “Swacchata Sankalp Desh Ka Har Ravivaar Vishesh Sa”, here, are being jointly organised by the Mussoorie Municipality, KEEN, Hilldaari, and Rotary Mussoorie. The objective of this three month campaign is to increase the involvement of the general public and give a boost to the ongoing activities of Swacch Bharat Mission.
For April’s Vishesh Ravivaar – I, in light of the weekly theme “Jan Suvidha Satyapan Campaign”, the organisations conducted a survey of all Public Toilets on the Mall Road, headed by Sanitation Inspectors Kiran Rana Minya and Virender Singh Bisht. In addition, a citizen feedback form was specially prepared to assess the ground reality of services availed by locals and tourists. It was found that in a sample size of almost 50, most of the people who used the toilet were local shop owners. They were somewhat satisfied with the infrastructure facilities. They rated the hygiene and cleanliness as Good and usable in New toilets and Bad and unusable in some old washrooms. Most of the Public Toilets in Mussoorie are easily accessible for the tourists on the Mall Road.
Suggestions were also received like extending the opening hours of public toilets and charging nominal monthly fees from local shopkeepers and their staff members. The Municipality believes that, in order to meet the ideals of Swacch Bharat Mission, it is essential that the local citizens take charge and responsibility for public utilities.
Ashutosh Sati, Executive Officer, suggested that there should be a Community Toilet Management Committee of the local shopkeepers who are regular users of Public Toilets in their areas and increase their responsibility and also give them power to take action and report to the higher authorities.
Among those present on the occasion were Virendra Singh Bisht, Sanitation Inspector Kiran Rana Minya, Sanitation Inspector Kaushiki Mohan Agarwal, Programme Coordinator, Nagar Palika, Ashok Kumar, Operations Manager, KEEN, Arvind Shukla, Project Manager, Hilldaari, Abhilash Khobragade, Community Manager, Hilldaari, Neeraj Gupta, and others.