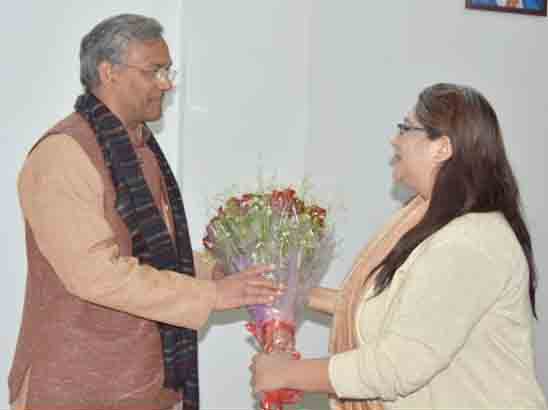 By OUR STAFF REPORTER
DEHRADUN, 2 Jan: Film Producer-Director Kanupriya called on Chief Minister Trivendra Singh Rawat at his official residence, here, on Wednesday.
Kanupriya is making an international feature film on 16 Sanskars of Hindu Vedic traditions. During the discussion, Chief Minister welcomed her decision to shoot the feature film in Uttarakhand. He suggested that shooting of the ‘Vivah Sanskar’ in the film should be done in Rudraprayag’s Triyuginarayan Temple. He promised the film unit all possible assistance from the state government during the film’s production.
It is worth mentioning that the shooting of the feature film will be done in sixteen places in the state including Devprayag, Karnprayag, Chamoli, Mukteshwar, Kausani, Patal Bhuvaneshwar, Champawat, Baijnath, Auli, Jageshwar Dham, Nainital, Dhanaulti, Rishikesh and Haridwar. The film will be screened at various international film festivals.