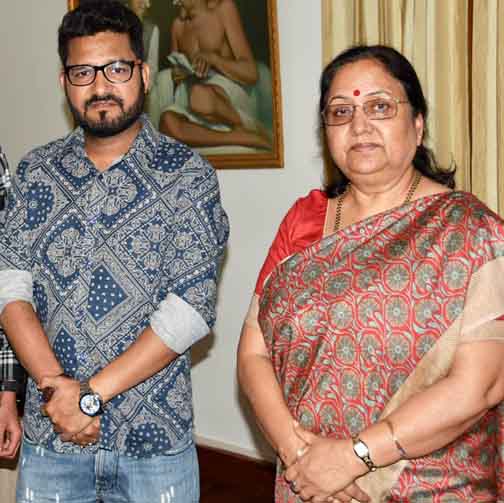 By OUR STAFF REPORTER
DEHRADUN, 2 Apr: Ashwini Dangwal, who is making his debut as a director with a proposed film titled ‘The Brave Child’, met Governor Baby Rani Maurya at the Raj Bhawan, here, today. He is a resident of Badrish Colony in Doon and belongs originally to Amelda Village in Tehri District. The film is going to be shot largely in Uttarakhand and he has already selected the locations. He briefed the Governor about his plans for the film. She also offered her suggestions on the subject.
Dangwal has worked with Salman Khan in the film, ‘Veer’, Anil Sharma’s movie, ‘Genius’, as a Principal Assistant Director. ‘The Brave Child’ is the story about the struggles of living in the hills. Shooting will begin this month. It will depict how people live in villages without basic amenities like road connectivity. The eleven year old protagonist’s effort to improve his life will be shown in the film. Dangwal has also written the story and script of the movie.
The cast includes Raghuvir Yadav, Tathast and Pithoragarh’s Krishna Bisht. It is being made under the banner of ‘Mountain Man Pictures’. The selected locations are in Mussoorie, Dehradun, Auli, etc. Around 22 local artistes will also get the opportunity to act in the film.