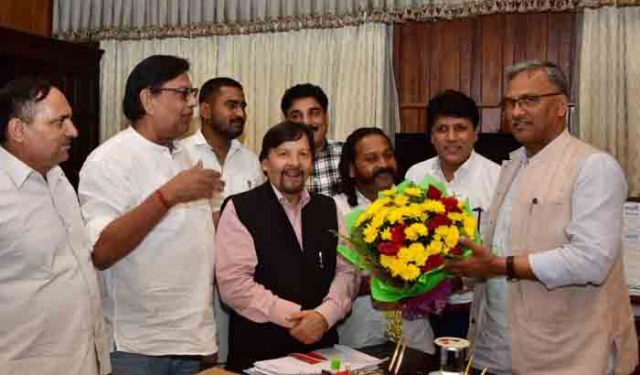 Dehradun, 10 Sep: Filmmaker Pramod Tanwar of ‘Royal Rajput Film Productions’ called on Chief Minister Trivendra Singh Rawat, here, today.
He told the CM that shooting would begin for the film, ‘Yudhveer – The Warriors’, in Uttarakhand from 30 September. This would be done at many locations. The movie is based on martyrs and their families. It is being directed by Arvind Swami and the main characters are being played by Prashant Gagodiya and Rajesh Malgudi.
Chief Minister Rawat said that the state government had implemented a proactive policy on providing facilities to filmmakers wishing to shoot in Uttarakhand. Permission was being accorded under a single-window system. Uttarakhand had received the ‘Most Film Friendly State Award’ and ‘Special Mention Certificate for Film Friendly State’.
Also present on the occasion was Ghananand.