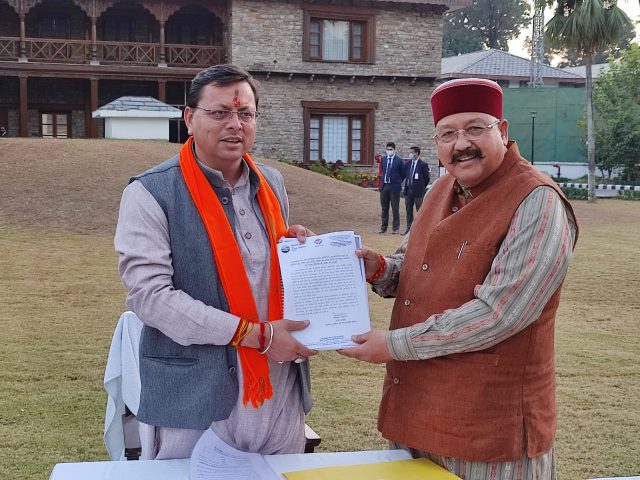 DEHRADUN, 29 Nov: Highly places sources within the Dhami Government indicated today that a positive decision was likely soon regarding the future of Uttarakhand Devasthanam Board by Tuesday or Wednesday. They further indicated that most likely, the government could announce the final decision by tomorrow itself in order to avoid continued confrontation with the Teerth Purohits. It may be recalled that the high-level committee constituted by the state government under the chairmanship of former Rajya Sabha MP Manohar Kant Dhyani regarding Devasthanam Board had submitted an 89-page report to Chief Minister Pushkar Singh Dhami and Tourism Minister Satpal Maharaj in Rishikeshyesterday. Sources added that the state government’s Cabinet Sub Committee was studying the report and would make recommendations to the CM, who would then take a final call in this respect. The report of the High level committee was later this evening, submitted to Chief Minister Dhami by Religious Affairs Minister Satpal Maharaj. A final decision can be taken as early as tomorrow by the government in the issue. Meanwhile, the Teerth Purohits and other stakeholders in respect of Char Dham and allied shrines have warned the government that they would be launching a state-wide mass movement and agitation against the government if the government does not dissolve the board by 30 November. They added that they would be holding dharnas from the Kedar Ghati to the district headquarters and reminded that the local leaders cutting across the political spectrum had lent full support to their movement. It was on 28 November 2019, the then Chief Minister Trivendra Singh Rawat had brought 51 temples of Garhwal Mandal under Devasthanam Board. This proposal was also passed in the cabinet. The Teerth Purohits and other stakeholders in respect of these temples have been agitating since then, opposing the formation of Devasthanam Board. In August, Chief Minister Pushkar Singh Dhami had constituted a high-level committee regarding the Devasthanam Board under the chairmanship of former Rajya Sabha MP Manohar Kant Dhyani. On behalf of the committee, a final report has been submitted to the government. Though, no one from the Committee or the government has indicated about the recommendations of the Committee in its report, indications are available that the government wishes to resolve the dispute in a positive manner which appears possible only if the Board is dissolved. Chief Minister Pushkar Singh Dhami said yesterday that an 89-page report had been prepared on behalf of former MP Manohar Kant Dhyani, chairman of the high-level committee on Devasthanam Board. Some decision regarding the board would be taken only after studying the report.On the other hand, Manohar Kant Dhyani, Chairman Devasthanam Board High Level Committee had also said yesterday that on the basis of talks with the pilgrim priests, the rights holders, a detailed report regarding the Devasthanam Board has been prepared and submitted to the Chief Minister. A decision had to be taken only by the state governmentafter studying the report. The Teerth Purohits have warned the government of intensified agitation if the Board was not dissolved by 30 November. Under the leadership of Chardham Teerthpurohit Mahapanchayat President Krishnakant Kotiyal, the Teerth Purohits today protested against the Devasthanam Board in Guptkashi Bazar, and resolved to intensify the movement. Ganesh Tiwari claimed that they had the support of all local public representatives.