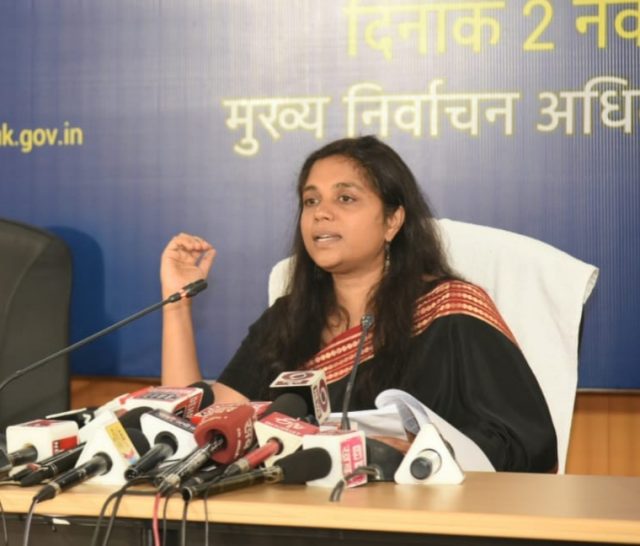 By Our Staff Reporter
Dehradun, 2 Nov: Uttarakhand Chief Election Officer Sowjanya today informed media that the number of voters in Uttarakhand has increased by 30,808 as on 1 January, 2022. With this net increase, the total number of voters in Uttarakhand has gone up to 78,46,000. Of the total number of voters, 40,87,018 are male while 37,58,731 are female, while 251 voters are in the others category.
Addressing a press conference here, today, at Secretariat Media Centre, the Chief Election Officer said that a total of 11,647 polling stations would be set up for the elections. This time there would be the facility to vote from home for those above 80 years of age and the differently abled voters. She also indicated that the Model Code of Conduct could be imposed in mid-January for the upcoming assembly polls.
On the basis of the qualifying date of 1 January 2022, the graph of the Integrated Electoral Roll had also been published, she disclosed, adding that claims and objections could be submitted on this from 1 November 2021 to 30 November 2021.
Chief Electoral Officer Sowjanya added that the claims and objections submitted by 30 November would be settled by 20 December, 2021. After this, the final publication of the electoral roll would be done on 5 January, 2022. From 1 September to 15 September 2021, door-to-door verification was carried out by the respective BLOs.
She added that, before the revision of the assembly electoral roll on the basis of the qualifying date of 1 January, 2022, standardisation of polling places was also done as preliminary preparation. No voter would have to walk more than 2 kilometres to reach the polling station from his or her residence. Approval was received from the Election Commission on 5 October 2021 regarding the amendment, change and addition of polling stations and centres. This was then finalised by all the District Election Officers as per rules under Section 25 of the Representation of People Act, 1951. The list of the finally published polling places has also been made available on the website of the Chief Electoral Officer, http://ceo.uk.gov.in, for information of the general public, along with making available the list of polling places to the recognised political parties. Earlier, the total number of polling stations was 11,024, which had increased to 11,647 after the final integration. Facilities like ramps, drinking water, adequate furniture, electricity, help desks, proper signage, separate toilets for men and women, and sheds had been ensured at each polling place as per the guidelines of the Election Commission of India.
The Chief Electoral Officer reminded that such citizens of India who have completing the age of 18 years or more as on 1 January, 2022, could submit their application on Form-6 for inclusion of name in the assembly electoral roll. In the present draft electoral roll, the electors whose names, various other details or photographs, etc., are wrong or incorrect could also submit an application on Form-8 for correction. She said that even if someone’s name had been deleted by mistake, even then Form-6 could be filled to get the name included.
The CEO said that, according to the latest guidelines of the Election Commission of India, the facility of voting through postal ballot would be provided to senior citizens above 80 years of age, and persons with disabilities flagged in the electoral roll. In Uttarakhand, the number of electors above 80 years of age is 1,65,113, while the number of differently-abled electors is 53,900.