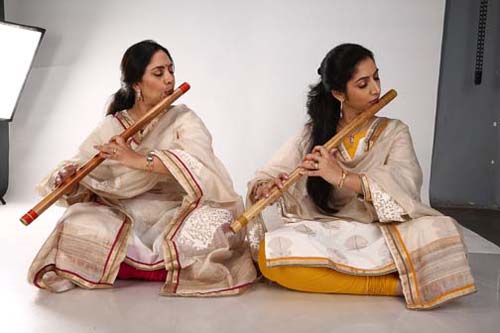 Popularly known as the ‘Flute Sisters’, Debopriya and Suchismita are the world’s most unique pair of flautists.

They were accompanied by Pt Shailendra Mishra on the Tabla.

On the occasion, Rakshit, a student said, “I was awestruck by the flute performance. I’m an avid music lover and was mesmerised by the soothing flute music. After witnessing the performance, I am influenced and wish to join flute classes.”

The two are the disciples of the legendary Pt Hari Prasad Chaurasia. They have performed as a duo accompanying their guru at numerous flute concerts in India as well as abroad.

The Chatterjee sisters have also provided background music for TV serials such as Afsar Bitiya, Balika Badhu and Crime Patrol.

Debopriya Chatterjee received a Sangeet Natak Academy Award in the Hindustani Instrumental Category as a flute artist, as well as the Ustad Bismillah Khan Yuva Puraskar in 2008.

Garhwal Post has established itself as a credible, balanced and forward looking newspaper in India. Based in Uttarakhand, the daily is read by the aware, socially and culturally responsible, high-income elite of society.
Contact us: info@garhwalpost.in
https://garhwalpost.in/over-50-free-dating-apps/