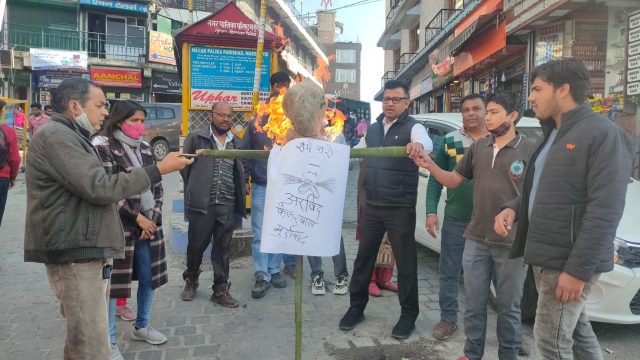 By Our Staff Reporter
Mussoorie, 1 Nov: Former Mussoorie woman president of Aam Aadmi Party, Bhavna Goswami resigned from the party’s membership, today, in protest against the assault by AAP workers on a retired principal, here.
People here are very upset with the indecent behaviour and assault by Aam Aadmi Party workers. Congress State Secretary Pankaj Chhetri and Bhavna Goswami protested together against AAP at Picture Palace Chowk here today. An effigy of AAP Convener Arvind Kejriwal was set ablaze.
Bhavna Goswami, while announcing her resignation, said that the manner in which the workers and leaders of Aam Aadmi Party are spreading hooliganism is wrong. Pankaj Chhetri said that, if AAP does not apologise, the Congress party would launch an agitation in the entire state and legal action would also be taken. Tanmeet Khalsa, Vinod Kumar and others were present on this occasion.