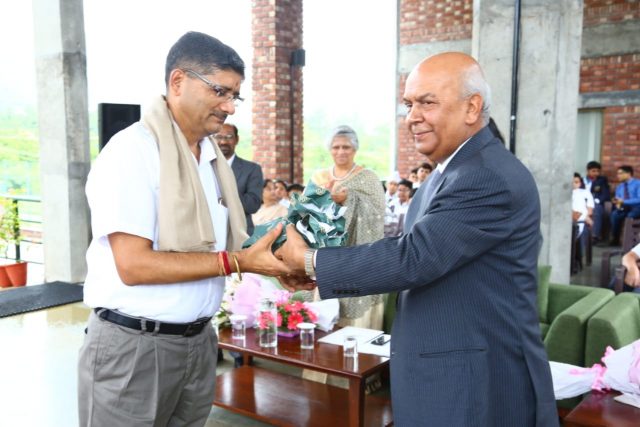 DEHRADUN, 13 Jul: Founder’s day celebrations started with fervor, enthusiasm, zest and zeal. For the guests it was a delight to witness and be a part of the Founder’s Day celebrations at Kasiga School against the picturesque backdrop of the sturdy and breathtakingly spectacular Mussorie Hills. An atmosphere of euphoria and excitement filled the entire school community to commemorate its Founder. The Chief Guest for the occasion was Ranber Singh, Regional Officer, CBSE, Uttarakhand. He was given a warm reception by the Chairman, Ramesh Batta, the First Lady, Poonam Batta, Director Finance and Administration, Siddharth Batta, Director Welfare, Chandini Batta, The Head of School, Sonali Sinha and the Deputy Head Academics, Jose Tom. The programme commenced with the lighting of the lamp of knowledge against the soulful melody of Ganesha Stuti. The audience was spellbound and enthralled by the graceful Odissi dance performance by the students. The School Choir rocked the stage with the western song, “Rise” and the soulful symphony of a Sufi song, composed by Dr. Shailendra Rawat, which received a standing ovation from the audience. Everyone was mesmerized by the finesse and talent of these young, budding students. The Chief Guest, Ranber Singh was gracious to address the gathering with his words of wisdom. He spoke at length about his humble beginnings and his growth thereafter. He complimented the school for its smart turnout .He said that the students were indeed privileged to make use of the world class infrastructure at Kasiga and also have staff who work round the clock with dedication and sincerity to bring out the best in each student. The Chief Guest was extremely impressed with the school and stated that it was “The Best School in his Zone.” He blessed the school with prosperity and abundance .He lauded the effort of the school in making its students smart, confident and responsible world citizens. The event came to an end with the Head of School, Sonali Sinha delivering the vote of thanks to the Chief Guest for taking time out from his busy schedule to be a part of the Kasiga family. She also thanked all for making the event a grand success. Since it is imperative to be physically fit to lead a healthy lifestyle, a state of the art Gym was inaugurated at the Kasiga campus by the Chief Guest and other dignitaries. The inclusion of regular fitness activity helps students maintain fitness, develop muscular strength and improve cardiovascular health. The Chairman, Ramesh Batta addressed the audience and felicitated those staff members, with mementoes as a token of his love and affection, who have completed a decade at Kasiga School.