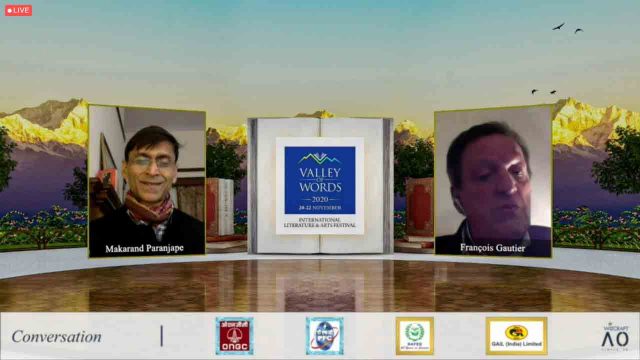 By Arun Pratap Singh with Schulu Duo
Dehradun, 22 Nov: A very interesting conversation was hosted on the ultimate day of the Valley of Words Literature & Arts Festival at Savoy, Mussoorie. It was an open conversation with no topic or title between ex-Professor of JNU, Makarand Paranjape, and French journalist and author Francois Gautier.
Makarand Paranjape started the conversation with a brief introduction of VoW, Dr Sanjeev Chopra and how the literary festival was leading the way in starting intergenerational dialogues on literature, history, politics and strategic topics. While Paranjape, an alumnus of St Stephen’s College, is one of the faculties in JNU that don’t subscribe to leftist ideology, and has authored several works of fiction, Gautier has served for many years as a journalist for several French publications such as Le Figaro in India and elsewhere. However, he is now more famous as an Indologist than a journalist. He has also founded a museum in India where he showcases Indian History from a nationalist perspective.
During the conversation between the two nationalists, Gautier disclosed that, besides continuing to write, he was also working on a book on Ayurveda and various aspects of it in a comprehensive manner. He was also considering writing a book on Kashmir as requested by the Indian Ambassador in Paris. He further disclosed that he was also involved currently in enhancing the collection at his museum to include material on Science in the Vedas and paintings on Indian history. He admitted that Covid had affected his travels in the past few months, but declared his intention to resume travelling in India despite the Covid situation. He claimed that he respected a lot of spiritual gurus in India but did not subscribe to the claims by the disciples of various gurus that only their guru was the true one. This, he added was akin to Christianity or Islam, which claimed that only their God was the true God and none other. He further observed that India was transforming in a positive manner but it needed to do so far more rapidly. Criticising China for various reasons, he said that, while nothing concrete could be claimed whether the Novel Corona virus was generated in a laboratory or not, there was no doubt that it spread across the world from China. He added that he was no fan of China, which was ruthless and had a dangerous vision to dominate the whole world. He cited incidents from his recent travel from India to Paris and then back to India, where he faced a barrage of questions in both places about the intensity/danger of the COVID-19 pandemic in both places. He replied that things weren’t always as bad as they could look through the prism of the media and claimed that he and his wife had been moving up and down to meet their publishers and friends. He also explained, on an optimistic note, that life ought to go on and was going on indeed in both France and India, though the precautions had to be followed religiously.
Paranjape congratulated Francois Gautier on his new book, ‘An Entirely New History of India’. Coming back to the socio-political distress and anxieties in France, Gautier mentioned that the French did not get scared easily and openly admired President Macron for terming the beheadings as an Islamic “problem” or Islamic terrorism. Though he claimed that the French had their own flaws, the inability to understand why some Muslims got offended over some cartoons was not one of them. In fact, he said the French people had always been proud of their freedom of expression and secular ideals. He also mentioned how the President of a “respected” country proclaiming that it was just to kill someone over a cartoon was totally ridiculous for most French people. Makarand commended Francois for writing another breezy book this time on Indian history. He further spoke about how refreshing it was for him to read a book of history like a story book without being bombarded with data, dates and information. He found it very informative and a great learning experience, without the dread of academic jargon being forced down his throat. He also praised Francois for the last chapter of the book which describes the future of India, its potential in respect of its military, spiritual, and technological power. Makarand even read out a brief part of the last chapter of Francois’ book, which praised India for maintaining peace, ahimsa, tolerance and acceptance of the “other” despite so many foreign invasions during the medieval era and, later, European colonisation. Francois was also praised for making bold statements and for never shying away from speaking his mind. Francois, a known Hindutva nationalist, reminded how Hindus were pushed out of Kashmir in a mass exodus during the 1990s by Muslim extremists. He also talked about his visits to Srinagar and parts of Kashmir, where he got the chance to talk with some local Hindu leaders of small Hindu communities who had been living there for generations and not converted to Islam, unlike their brethren from mainstream Hindu communities in Kashmir.