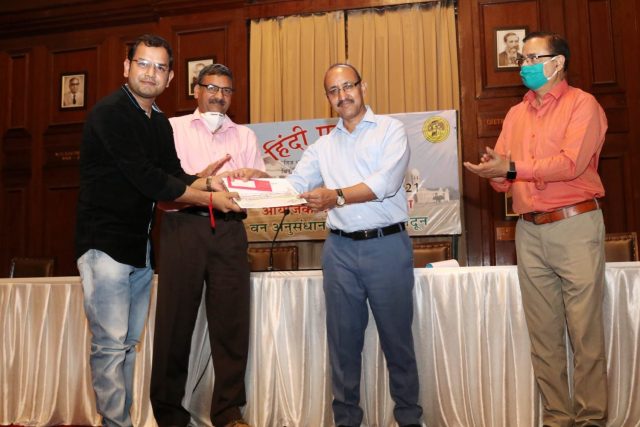 By Our Staff Reporter
Dehradun, 14 Sep: Forest Research Institute celebrated Hindi Diwas today with much enthusiasm. Prizes and citations were awarded to winners of different competitions organised during the ‘Hindi Pakhwara’ from 1 to 14 September.
SK Thomas, Registrar, FRI, welcomed all the Senior Scientists, Officers and Employees present at the meeting.
Addressing the gathering, AS Rawat, Director, FRI, spoke about Rajbhasha Hindi and use of it as the official language. He added that they ought to be proud of using Hindi as they were from a Hindi speaking state. He congratulated all the winners of competitions organised during the fortnight.
FRI deemed to be University and Forest Ecology and Climate Change Division, FRI, were awarded the Shield and Felicitation Letter for their excellent work in Hindi during 2020-21.
Ashish Kumar, Akanksha Shukla, Gaurav Negi and Raju were presented cash awards and citations for the Essay Competition. Anil Singh, Nitish Mathpal, Gaurav Negi and Ashish Kumar were the winners of the Noting and Drafting Competition. Kirti Rawat, Chandraprabha, Mohit Verma and Akshay Saini were the winners of the Hindi Typing Competition. In the speech competition, Vipul Sharma, Gaurav Negi, Rudradev Sharma and Akshay Saini were the winners. The Poem Recitation competition was won by Gaurav Pandey, Uma Shankar, Kishan Kumar and Mohit Bisht.
At the end of the programme, Shankar Sharma, Assistant Director (Official Language), thanked all the participants and Judges for the success of the Hindi Pakhwada.
All Heads of Divisions and Sections, Senior Scientists, Officers and Employees were present on the occasion.