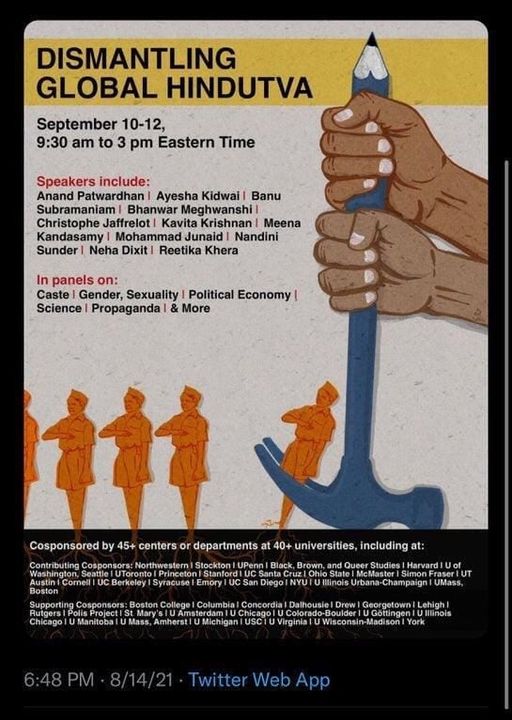 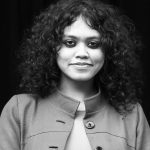 By Rati Agnihotri
One often comes across the concept of a parallel universe in science fiction and fantasy. But for some people, it seems like such a universe exists in real life too. When someone falls madly in love with a particular ideology, they begin to feverishly conjure up their own theories by hook or by crook and somehow believe the universe will conspire to make all this come true. At least, such seems to be the case with the anonymous organisers of the ‘Dismantling Global Hindutva’ Conference.

The title itself comes across as a shock. Whatever does anyone mean by dismantling global Hindutva? ‘Dismantling Global Hindutva’ is an online event happening from the 10th to 12th of September. According to the organisers, the event has been co-sponsored by at least 50 universities across the world. If one sees the names, most of these are universities from the US. Although, after many Hindu cultural organisations from the US protested against the event, the names of some universities have been taken down from the event brochure. According to various news reports published in Firstpost, many of these universities clarified that they had never given any consent for their name or logo to be formally used for such an event. If a particular department or a faculty member decides to participate, it is their choice and freedom but that doesn’t amount to these universities formally endorsing the event, they said.

Hindutva is a word with Sanskrit roots which has been widely used in academic and intellectual discourse surrounding Hinduism. The great philosopher and thought leader, Swami Vivekananda used ‘Hindutva’ to talk about the pride and glory of Indian culture and civilisation. So, it seems rather unfair that the organisers of this particular conference choose to totally overlook the historical underpinnings of ‘Hindutva’ and its complex associations and rather appropriate it to suit their narrow, partisan agenda. According to the anonymous organisers of the ‘Dismantling Global Hindutva’ conference, there is a difference between Hindutva and Hinduism. By Hindutva, they apparently mean the hard line Hindu ideology being propagated by the ruling BJP.

So, it also seems like the hidden agenda of this conference is to actually attack the ruling BJP government. If one looks at the agenda of this supposed conference, it’s hard to miss that it is basically a vicious attack on all the policies of the BJP government. And the conference organisers are trying to do all this in the garb of an academic conference. The use of the phrase ‘Global Hindutva’ is itself an oxymoron. Hindus might be in a majority in India but they happen to be in a minority in most of the countries across the world. In countries like the US, they have specific cultural organisations representing them to protect their interests and identity. In what way can a global minority, with absolutely no history of creating any disturbances or violence of any sort, be a threat to world peace, is beyond anyone’s comprehension. But the conference tries to give you the impression that under the ruling government of India, there is some massive, global agenda of ‘Hindutva’ being undertaken which has its power centres across the world!

An academic conference, by its very definition, discusses all sides of an argument and gives space to conflicting viewpoints. If this were really a conference, one should have seen the names of some speakers with the other side of the story. But all speakers of this so called conference come from a similar background of far left sensibilities. And they all seem to have an a priori agenda, to ‘dismantle Hindutva’ and create some sort of a public opinion against the ruling government in India.

(Rati Agnihotri is a freelance journalist and writer, with about 10 years of experience across broadcast, radio and digital media. She is also a bilingual poet. Her first book of English poems ‘The Sunset Sonata’ has been published by Sahitya Akademi, India’s National Academy of Letters. Her second book of poems ‘I’d Like a Bit of the Moon’ has been recently published by Red River. Rati’s Hindi poems have appeared in a number of literary journals. Rati has completed her M.A. (International Journalism) from University of Leeds, U.K. and B.A. (Hons) English Literature from Miranda House, Delhi University.)

Garhwal Post has established itself as a credible, balanced and forward looking newspaper in India. Based in Uttarakhand, the daily is read by the aware, socially and culturally responsible, high-income elite of society.
Contact us: info@garhwalpost.in
https://garhwalpost.in/third-base-dating/