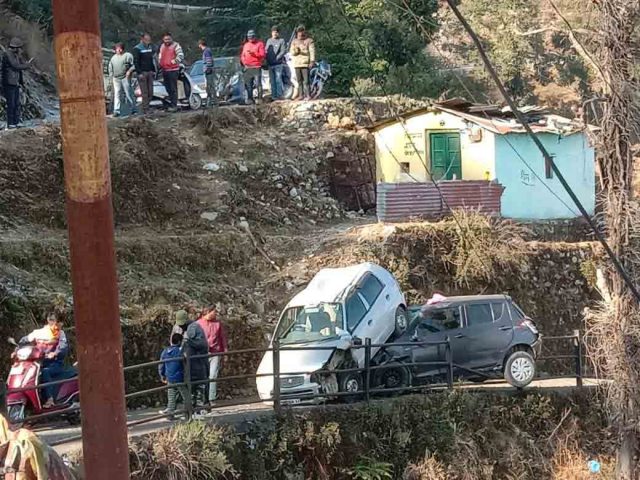 By Our Staff Reporter
Mussoorie, 30 Dec: Two cars slipped on a frost covered stretch near Indira Colony on the Mussoorie-Kempty Road, went out of control and plunged downhill onto another road. Five people were injured and were taken to Mussoorie Civil Hospital with the help of locals. The cars also suffered severe damage.
Both the cars were going from Mussoorie towards Kempty Fall and went off the road. One of cars got stuck on parapet, due to which it didn’t go further downhill, preventing a major tragedy. Mussoorie Police and Fire Service personnel reached the spot and the injured were sent to the hospital. Due to the heavy cold in Mussoorie, the roads are being covered with frost, due to which two and four wheelers are slipping dangerously. Locals wanted the local administration and municipal council to make special arrangements for safety on the road.
SDM Manish Kumar said he had given instructions to the officials of the National Highway and Municipality Administration to put lime powder on the roads, while the police have also been instructed to deploy personnel at the dangerous points.

Garhwal Post has established itself as a credible, balanced and forward looking newspaper in India. Based in Uttarakhand, the daily is read by the aware, socially and culturally responsible, high-income elite of society.
Contact us: info@garhwalpost.in
https://garhwalpost.in/free-dating-in-karachi/ trans single https://garhwalpost.in/indianapolis-casual-dating/