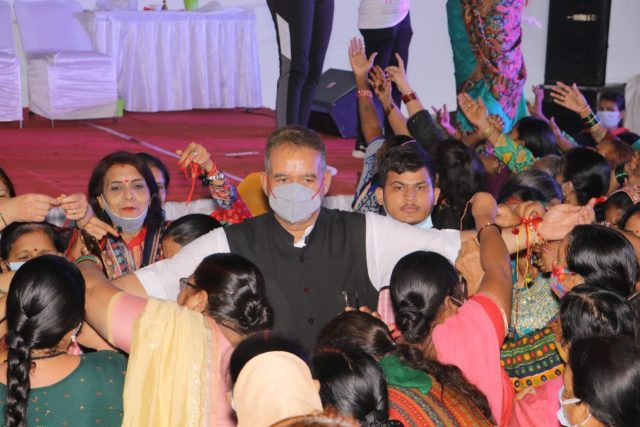 By Our Staff Reporter
Dehradun, 14 Aug: A large number of women residents of Vijay Colony tied Rakhi on the wrist of Cabinet Minister Ganesh Joshi and on RSS  Prant Vyavastha Pramukh, Surendra Mittal, on the occasion of Raksha Bandhan. The programme was organised at Survey of India Estate in Hathibarkala. Speaking on the occasion, Cabinet Minister and local MLA Ganesh Joshi greeted everyone on the occasion of Indepdence Day, and said that the people were his family and he loved to serve the people. He said that he was fully committed to  development and to the welfare of the people and never switched off his phone as he was available for them any time of the day.
He urged the people not to get carried away by a negative campaign against him by some unscrupulous people. Joshi also handed over some gifts to women and children on this occasion.
Mittal who was the chief guest on the occasion, stated that he was very happy to attend this function and reiterated that the goal of the Rashtriya Swayamseval Sangh (RSS) was nation building. Special guest Rajni Kukreti, Municipal Councillor Satendra Nath, Mahila Morcha Mandal president Aruna Sharma, BJP Sridev Suman Mandal president Poonam Nautiyal, Municipal councillor Bhupendra Kathet, Dr Babita Sahoutra, Surendra Rana, BJP Yuva Morcha National Vice President Neha Joshi, Bhavna Choudhary, Manjit Rawat, Pradeep Rawat, Om Prakash Bawadi, SS Bisht, Mandal Deputy Chairman MPS Pundir, etc., were present.