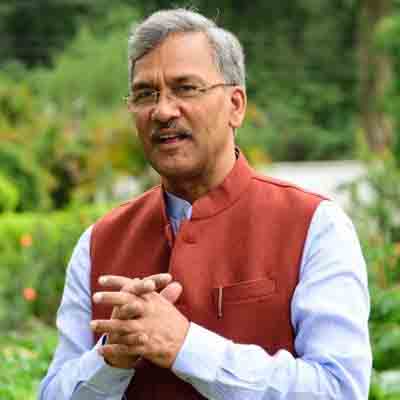 By Our Staff Reporter
Dehradun, 11 Nov: Chief Minister Trivendra Singh Rawat, today, indicated that Gairsain would remain the summer capital and Dehradun would be the permanent capital of the state.
Speaking to media persons at his official residence here, today, he said that Gairsain having become the summer capital of the state would require a lot of infrastructure development to make it function effectively. Parallel arrangements would be made in Gairsain as per the requirements of a summer capital. To ensure this, a committee had been constituted under the chairmanship of the Chief Secretary to plan the creation of various infrastructure facilities in Gairsain over a period of 10 years. He stressed that, apart from the investment made by the state government, private investors would also be invited to participate. Besides the basic infrastructure in the summer capital, infrastructure relating to health, education, water supply, power supply, sewerage, etc., would also have to be created. An amount of Rs 25,000 crores had been announced by the Government for the creation of this infrastructure to establish good schools, sports grounds, and entertainment facilities, etc., in Gairsain.
The CM reminded that the first step towards achieving this would be provision and arranging of adequate land, and improving connectivity to this region.
Rawat disclosed that a sum of Rs 9 crores had been provided for the construction of a double lane road from Diwali Khal to Bhararisain. Funds had also been provided for the construction of four helipads. The Chief Minister also expressed the need for huge investments to make parallel arrangements enabling Gairsain to effectively function as the summer capital.
While speaking to media persons, the CM also appealed to the people to use masks and maintain social distancing during the festive season and to minimise the use of firecrackers, adding that it was necessary to keep the environment healthy to ensure better health. He has appealed to all to avoid excessive crowding in the markets during the festivals.
On this occasion, the Chief Minister also congratulated the people of Bihar for decisive voting in the Bihar elections. He said that Prime Minister Narendra Mode had proved, once again, that the people of the country still repose faith in him and he continues to steer the country in the right direction.