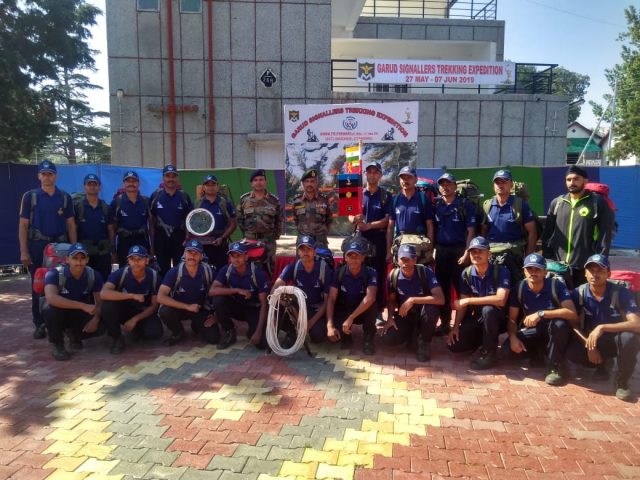 By OUR STAFF REPORTER
RANIKHET, 9 Jun: The Indian Army’s Garud Signallers organised a Trekking Expedition spanning over a period of 12 days. The team trekked through the plains of the hinterland on to treacherous and challenging terrain of the mighty Himalayas. The aim of the trekking expedition was to spread the message of fraternity, solidarity, oneness and the indomitable spirit of soldiers of the Indian Army. The expedition was flagged off on 27 May from Song (45 kilometres from Bageshwar) and the flagging in ceremony was conducted at Chaubatia on 9 June.
The expedition, led by Maj Avinash Belwal, comprised two officers including Medical Officer Capt Uttam and 16 Other Ranks of Garud Division. The expedition traversed a distance of 155 kilometres. The team clocked an average of 13-15 kilometres per day and interacted with local villagers during the course of their journey. The route for the expedition was from Song to Pindari and back via Loharkhet, Raichand Deota, Pitang and Dhakuri. The expedition team had to manoeuvre to overcome landslides during the course of expedition.
The trekking expedition by Garud Division was an initiative to propagate and inculcate the spirit of nationalism and adventurism amongst the common masses, especially the youth. The team also spread the message of “Swachh Vatavaran – Swasth Jeevan”. The expedition demonstrated tenacity, fitness and camaraderie of the soldiers of the Indian Army. It also gave ample exposure to the soldiers on facing new challenges in life and boosted their morale.

Garhwal Post has established itself as a credible, balanced and forward looking newspaper in India. Based in Uttarakhand, the daily is read by the aware, socially and culturally responsible, high-income elite of society.
Contact us: info@garhwalpost.in
quick hookup dating sites