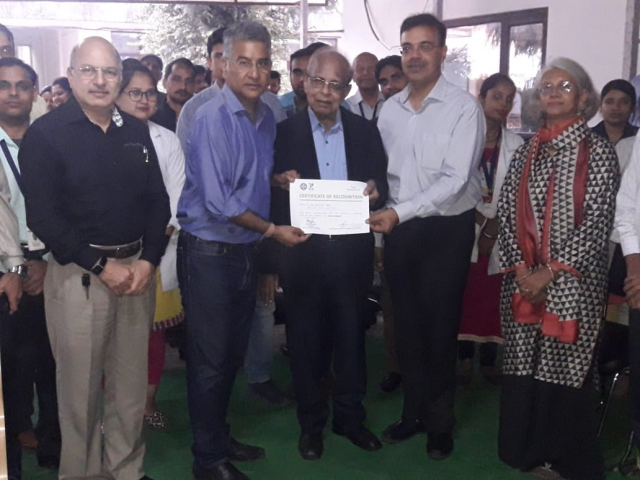 Dehradun, 5 Nov: Under an agreement between the Gati Foundation and the Indian Institute of Petroleum, a plastic bank has been established in Doon. The first such plastic bank has been formed at Drishti Eye Institute located at Subhash Road. Under this agreement, Gati Foundation will provide such plastic waste to the Indian Institute of Petroleum from which diesel will be made at the plant installed there. Gati Foundation will also set up such plastic banks in various other institutions of the city.
On the occasion of establishing the Plastic Bank at Drishti Eye Institute, Dr Gaurav Luthra, Director of the Institute, said that his organisation hasd always been vigilant about plastic waste and, till now, it had been disposing of plastic waste at its own level. He expressed happiness that, now, diesel could be made from waste. He said that, along with depositing the plastic waste of the institute in this plastic bank, plastic waste coming from the houses of more than 80 employees of the institute would also be deposited.
Founder of Gati Foundation, Anoop Nautiyal said that the organisation was committed to setting up such plastic banks in all the big institutions of the city. He also appealed to the institute officials, staff and common people to try to deposit plastic waste in such plastic banks so that it could be disposed off scientifically.
Dr Anjan Ray, Director of the Indian Institute of Petroleum, expressed happiness at the inception of the first plastic bank in Dehradun and hoped that this plastic collection project based on citizens’ collective responsibility would prove to be a milestone in coming times.
On this occasion, Dr MC Luthra, Chairman of Drishti Eye Institute, Dr Shashank Gande and staff, along with Rishabh Srivastava, Pyare Lal, Vidush Pandey and Praveen Upreti were also present.