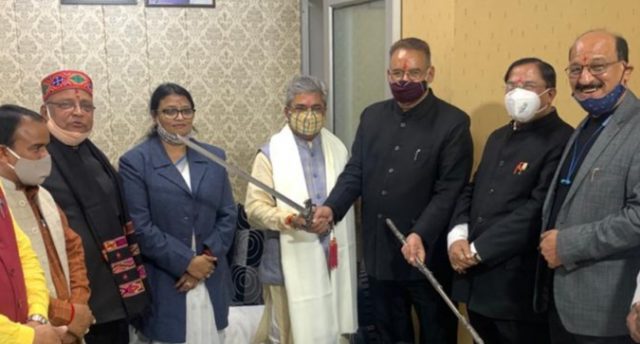 By Arun Pratap Singh
Dehradun, 28 Nov: Newly appointed in-charge of BJP affairs in Uttarakhand, Dushyant Gautam and his co in-charge of the party affairs, Rekha Verma, are currently on their first official visit to Uttarakhand. It may be recalled that Uttarakhand has just about an year and a few months for the assembly polls, and the Party’s national leadership has started focussing on the state now and ensuring that the party was fully prepared for the elections.
Of course, given the fact that no party has so far been able to retain power post polls, the party understands this huge challenge and is preparing to buck the trend of change every poll. Gautam is currently the Party’s National General Secretary and he is on his first official visit to the state. Addressing a meeting of the state level office bearers of the party and the ministers, the party MLAs from the state and those who held ministerial ranks in the government, Gautam called on them to ensure that BJP created history by winning more seats than the last time and retaining power by absolute majority once again in Uttarakhand.
Gautam observed that the current Prime Minister Narendra Modi was the all time most popular Prime Minister of India. The reason for this is the hard work he was putting in and work being done by his government at the national and international level. He reminded the party leaders that BJP was not created as a political party merely to gain power but to serve the people and the country. He said that the BJP leaders ought not forget that the main objective of the party was to serve the country and the people and doing social service was of paramount objective. He claimed that this was clearly evident during the current Corona period when the BJP workers were highly active as social workers stood amongst the common man as warriors and serve the people.
Gautam further claimed that Uttarakhand government was doing a very good job. The achievements of all the activists of the union and state governments ought to be adequately conveyed by the party workers to the public.
On this occasion, co in-charge of the party affairs Rekha Verma also called upon the workers to gear up for the 2022 assembly polls. She observed that BJP had won assembly polls and the bypolls in 11 states in recent elections in the country including in Bihar. Therefore the party ought to carry forward its winning trend and win again in Uttarakhand.
In his welcome address, State President Banshidhar Bhagat said that every worker of Uttarakhand BJP was ready for election all the time. In Uttarakhand, BJP would be contesting state polls in 2022 in the name of development. Bhagat assured Gautam and Verma that in 2022, the BJP government in Uttarakhand would retain power in Uttarakhand and would  buck the trend of power change every poll in the state so far. State General Secretary Kuldeep Kumar convened the proceedings at the meeting while State General Secretary Rajendra Bhandari, Rajya Sabha MP Naresh Bansal, Cabinet Minister Subodh Uniyal, Minister of State Independent Charge Dhan Singh Rawat, were also amongst those present on the occasion.In the second session, another meeting was held in which the officials and public representatives of Maha Nagar and District Dehradun units of the party also participated. This meeting was also addressed by Gautam and Verma.