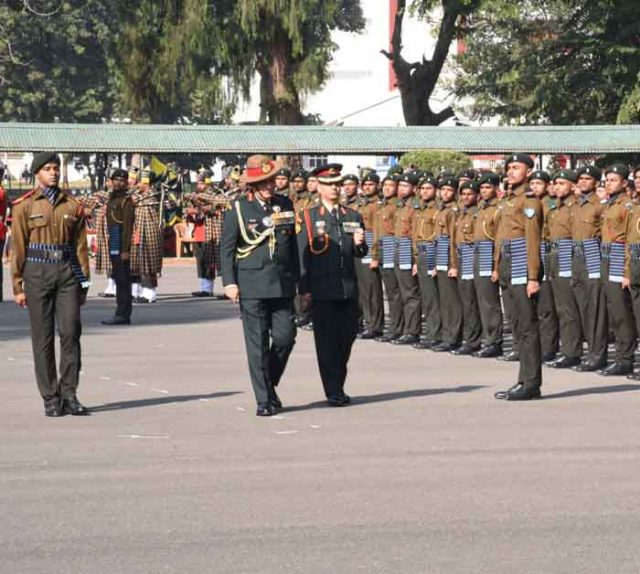 DEHRADUN, 29 Nov: Twenty-one Cadets of the 184th Course graduated from RIMC, here, today. The Chief Guest on the occasion was General Bipin Rawat, Chief of Army Staff. Gen Rawat reached RIMC at around 10:30 a.m. and received the ‘Guard of Honour’ from the Cadets of the RIMC. A galaxy of senior officers of the Defence Forces was present.

The event was attended by various Heads of Military Installations from the valley. The Cadets received their parchment certificates during a glittering function at the Thimayya Auditorium. The cadets were also presented various awards for their excellent performance during the term.

The winner of the ‘Sword of Honour’ Cadet Captain Harshvardhan Rathore hails from Rajasthan. Father Shravan Singh Rathore is a teacher and his mother is a government employee in the state of Rajasthan.

General Rawat presented the awards and also went around the exhibition put up by the hobby clubs of the Cadets. Col Vivek Sharma, Commandant, presented the ‘End of the Term report’ in the jam-packed Thimayya Auditorium.

Gen Bipin Rawat presented Parchment Certificates and ‘End of the Term Awards’ to the passing out course.  He praised the institution for having produced such outstanding cadets and also hailed the faculty for playing a vital role in the upbringing of the boys. He spoke about how it was important to understand the value of studies while maintaining robust physical and mental standards.

Cadets of RIMC enthralled the audience with their talent in Dance and Music, following the Award Ceremony.  Cadets, parents and guests attended the special Ceremonial Lunch.

In the end, Cadet Captain Harshvardhan Rathore proposed the vote of thanks.

Garhwal Post has established itself as a credible, balanced and forward looking newspaper in India. Based in Uttarakhand, the daily is read by the aware, socially and culturally responsible, high-income elite of society.
Contact us: info@garhwalpost.in
https://garhwalpost.in/fun-dating-activities/