RUDRAPRAYAG, 18 Sep: Army Chief General Bipin Rawat visited Badrinath and Kedarnath with his family today. He was given a warm welcome by the Tirth Purohits and devotees present. He also inspected the reconstruction work underway at Kedarnath. Strict security arrangements had been made on the occasion. The General arrived at the Kedarnath helipad by an Army MI-17 at 9:05 a.m. He was welcomed by Tirth Purohit Srinivas Posti. He spent considerable time enjoying the natural surroundings and the spectacular view. He reached the temple complex on foot at around 9:20 a.m. and, immediately, went in to offer prayers. After the prayers, he circumambulated the temple. He also visited the ‘Divya Shila’. Later, he interacted with the priests and volunteers of the Youth Foundation. He was requested to provide opportunities to the local youth to join the Army. He praised the training camp run by the Youth Foundation for those wishing to join the Armed Forces. He also spoke over the phone to Col Ajay Kothiyal of the Foundation. After this, he left by helicopter for Joshimath, a little earlier than planned because of deteriorating weather. 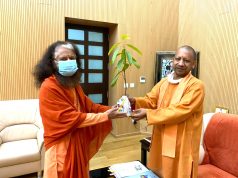