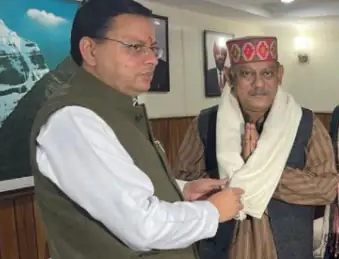 DEHRADUN, 19 Jan: Col Vijay Rawat (Retd), younger brother of the late CDS General Bipin Rawat, met CM Pushkar Singh Dhami in Delhi on Wednesday. Col Rawat joined the BJP today at BJP Headquarters, New Delhi in the presence of CM Dhami and State President Madan Kaushik. Party sources have indicated that the BJP may cut the tickets of sitting MLAs in the upcoming assembly elections. In such a situation, speculation on Colonel Rawat contesting elections after joining the BJP has also intensified. Voting for the Uttarakhand Assembly Elections will be held on 14 February. Colonel Rawat says that his family’s and BJP’s ideology are very similar. In such a situation, he wants to serve the public by joining BJP. If the party’s approval is given, he is ready to contest the upcoming assembly elections. The late General Rawat was very active in Uttarakhand. On 19 September, he had visited his maternal home in Thati village in Dunda block of Uttarkashi. Addressing the villagers, he had said that migration from the mountains was the biggest concern. He had promised that, after retirement, he would take the initiative to re-populate the mountain villages, which were affected by migration.

Garhwal Post has established itself as a credible, balanced and forward looking newspaper in India. Based in Uttarakhand, the daily is read by the aware, socially and culturally responsible, high-income elite of society.
Contact us: info@garhwalpost.in
muslim speed dating manchester writing an online dating profile meet uk singles