By Our Staff Reporter
Dehradun, 7 Feb: A glacier broke off in Joshimath after an avalanche hit Raini village in Joshimath region of Chamoli district this morning. According to official sources, the disaster struck around at 10 a.m. Chief Secretary Om Prakash stated that at around 150 people were feared dead, most of them were labourers working at the recently commissioned Rishiganga power project and an under-construction downstream power project (5 kms away) at Tapovan. According to sources, a large number of labourers were working at the two under construction power projects at the time of the disaster. 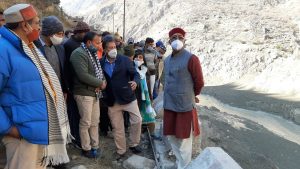 The glacial burst led to the rising of water levels in River Rishiganga, which washed away the Rishiganga small hydro project of 13.2 MW capacity. Not only this, the flash floods also badly damaged the downstream hydro project of NTPC at Tapovan on the river Dhauliganga, a tributary of the river Alaknanda. The ITBP teams have recovered at least ten bodies. At least 16 persons trapped in the tunnel at Tapovan were rescued by ITBP from a smaller tunnel. 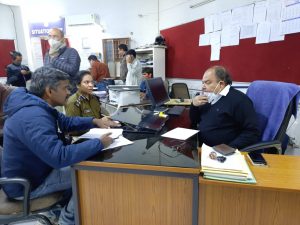 Chief Minister Trivendra Singh Rawat has announced Rs 4 lakh, each, as compensation for the families of those killed.
Authorities in Uttarakhand sounded a red alert from Chamoli to Haridwar after the glacier broke off. Meanwhile, officials said that settlements near the river banks from Chamoli till Rishikesh and Haridwar were cleared. This operation was still underway at the time of filing of this report. Teams from the police, SDRF, NDRF, the Army and the ITBP were on the disaster sites carrying out the relief and rescue operations. 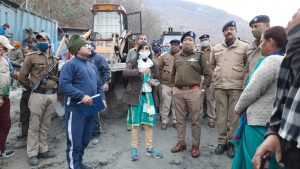 Chief Minister Trivendra Singh Rawat visited the affected region and inspected the disaster-hit areas of Tapovan and Raini Village. He later returned to Doon. PM Modi is in touch with Uttarakhand CM and the state administration over the issue. The CM has also released a helpline number for those stranded in the affected areas. Home Minister Amit Shah was also monitoring this incident and he is expected to visit Uttarakhand tomorrow to assess the situation.
Though the water in the rivers was still flowing above the normal level, the government sources meanwhile informed that the rise in water level has been contained to a great extent and there was little danger of downstream flooding of rivers. In addition to the two badly damaged power projects, it is learnt that five bridges have also been damaged. The dam of NTPC’s Dhauligaga project, guest house and residential building were also damaged.
According to DGP, Uttarakhand, Ashok Kumar, a lot of mud and slurry had flown downstream which were initially affecting the pace of rescue operation.
Later, addressing a press conference in Dehradun, CM Rawat stated that ITBP teams had somehow managed to enter the second tunnel at Tapovan, where around 35 persons were trapped. Due to the mud and slurry having entered the tunnel, the ITBP teams were facing obstacles in the rescue operations. He announced that more NDRF teams were expected to reach the disaster site by tomorrow. He added that President Ramnath Kovind, PM Narendra Modi, Home Minister Amit Shah, UP CM Yogi Adityanath had called him several times and promised all possible help.
Governor Baby Rani Maurya has also prayed for the welfare of those affected. She has been briefed by the CM on the developing situation and is also keeping in touch with the authorities to ensure all possible measures are being taken.
The government also appealed to the people not to venture near the Ganga River.
All people downstream of the incident living near the river were advised to move to safer places. Tourism destinations like Rishikesh saw an exodus of panicked tourists, who had come for the weekend from places like Delhi.