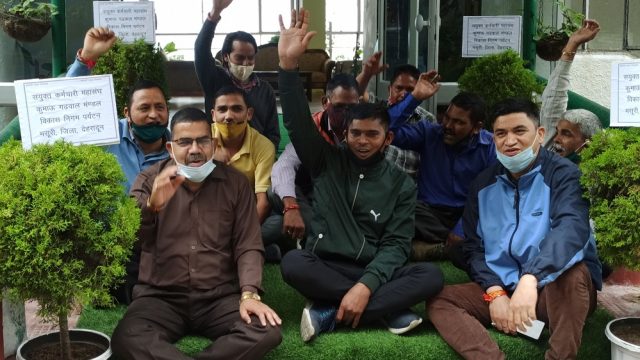 By Our Staff Reporter
Mussoorie, 7 Sep: The Joint Employees Federation of Kumaon and Garhwal Mandal Vikas Nigams, staged a sit-in protest at the gate of the Garhwal Mandal Vikas Nigam, here, today. The employees raised slogans against the government.
A 13-point letter of demands was sent by the Federation to the Chief Minister Uttarakhand via the SDM, Mussoorie. The employees are demanding regularisation for those who have worked continuously for 15-20 years. They want vacant posts to be filled by such employees. Due to the current corona epidemic, both the corporations have suffered huge losses and the employees have not received salaries or pensions for several months. They demanded that Rs 50 crores, each, be given to the nigams by the government. The corporations ought to be merged as part of the Uttarakhand Tourism Council. Sand mining, construction related work should be given to the nigams to make both self-reliant. Along with departmental promotions, the departmental quota of classes IV to III should be filled soon. The arrears of retired employees should be paid. Along with the personal problems of the employees of Garhwal Mandal Vikas Nigam and Kumaon Mandal Vikas Nigam, the pending demands should be settled from time to time by the employee’s organization of both the corporations.
The Federation said that it would be compelled to launch an agitation if the government doesn’t concede their demands. Rishi Rajbhar, Shiv Singh, Inder Singh, Rakesh, Shahzad and others were present on the occasion.