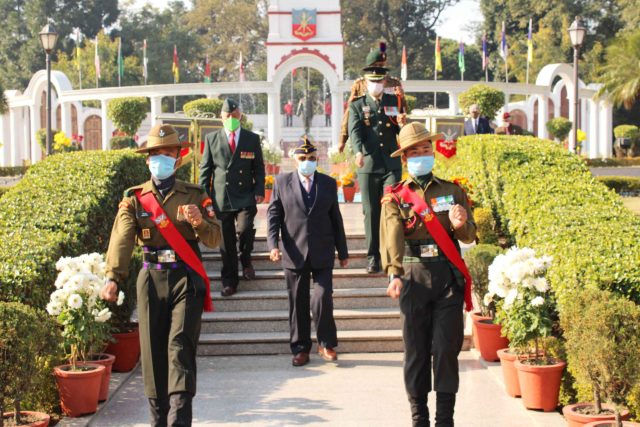 Dehradun, 20 Dec: This year is the Golden Jubilee fiftieth year of the 46 Regular and 30 Technical Courses of the Indian Military Academy, commissioned into various arms and services of the Indian Army on 20 December, 1970. The young officers of this landmark course got into active operations of the 1971 Indo Pak War that saw the birth of a new nation, Bangladesh. During the 1971 war, twelve young officers of the Course made the supreme sacrifice, of which two 2/Lt Kanwarjit Singh and 2/Lt Manjunath were awarded Vir Chakras posthumously. The course is also the proud recipient of six gallantry awards – four VrCs (two posthumously), one Kirti Chakra and one Shaurya Chakra.
The Golden Jubilee Reunion for veterans of various courses is a tradition of the Indian Military Academy. It is an occasion for the course veterans to get together and relive their memories in the true spirit of soldierly bonhomie. The Indian Military Academy takes great pride in achievements of its alumni and ensures strong bonding with the veterans. This year, the restrictive protocols of COVID-19 prevented the traditional celebrations of the Golden Jubilee Course. In the prevailing circumstances, to mark this momentous occasion, six veterans of the course residing in Dehradun led by Maj Gen Chandra Prakash and Brig VPPS Gusain paid homage at the IMA War Memorial in memory of their fallen course mates. A souvenir for the course is being published by the course to keep fresh the nostalgic camaraderie that exists amongst the veterans. A virtual meet attended by a large number of veterans was held later, today, wherein a video film reliving the days at the IMA was also projected.