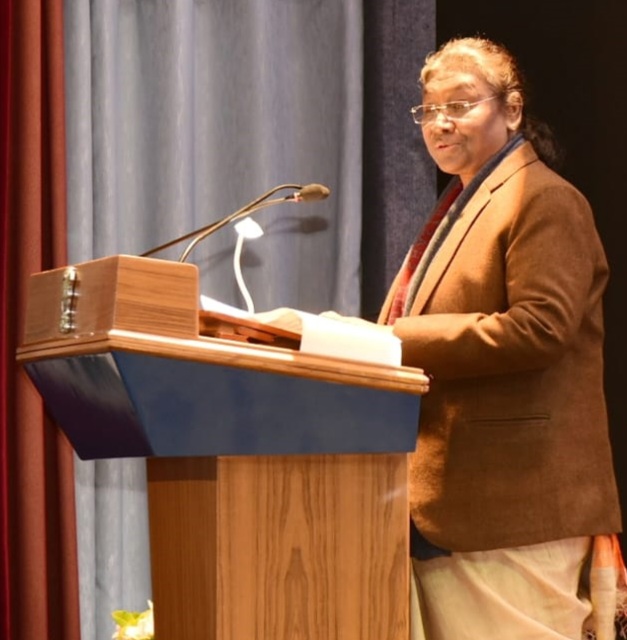 Mussoorie, 9 Dec:  President Droupadi Murmu addressed the valedictory function of the 97th Common Foundation Course at the Lal Bahadur Shastri National Academy of Administration (LBSNAA) here, today, the second day of her Uttarakhand visit. On this occasion, Governor Lt General Gurmit Singh (Retd) and Chief Minister Pushkar Singh Dhami were also present. Addressing the Officer Trainees, Murmu said that as she was addressing them, the words of Sardar Vallabhbhai Patel were echoing in her memory. In April 1947, Sardar Patel, at a meeting with a batch of IAS trainees, had said, “We must expect and we have a right to expect the best out of every civil servant in whatever position of responsibility he or she may be.” The President said that, today, it could be proudly said that the civil servants had lived up to these expectations.

The President noted that the main mantra of this Foundation Courses was “we, not I”. She expressed confidence that the officer trainees of this course would shoulder the responsibility of taking the country forward with a collective spirit. She said that many of them would run the administration of a large part of the country for the coming 10-15 years and would be connected with the masses and even go on to become Chief Secretaries and Secretaries to Government of India. They could give a concrete shape to the India of their dreams, she added.

Referring to the Academy’s motto, ‘Sheelam Param Bhushanam’, which means, “character is the highest virtue”, the President said that the method of training at LBSNAA is based on the principle of Karma-Yoga, in which character is of utmost importance. She advised officer trainees to be sensitive towards the underprivileged sections of society. She said that ‘Anonymity’, ‘Ability’ and ‘Austerity’ are the ornaments of a civil servant. She asserted that these qualities would give them self-confidence throughout the service period.

Murmu added that the values which officer trainees had learned during the training should not remain confined to papers only but actually be implemented in life. The officers would come across many challenges and difficulties while working for the people of the country but they still ought to act with confidence, following these values even under trying circumstances. Leading India on the path of progress and development and paving the way for uplift of the people of the country, was their constitutional duty as well as moral responsibility.

The President emphasised that any work for the benefit of society can be accomplished efficiently only when all the stakeholders are taken along. When officers take decisions keeping in mind the marginalised and deprived sections of society, they would certainly be successful in achieving their goals.

She asserted that good governance is the need of the hour. Lack of good governance was the root of many of the social and economic problems in the country. To understand the problems of the people, it is necessary to connect with the common people. She advised officer trainees to be humble in their connect with people as only then would they be able to have conversations with them, understand their needs and work for their betterment.

Speaking about global warming and climate change, Murmu reminded that the whole world is struggling with these issues. There is an urgent need to take effective steps to solve these problems. She appealed to officers to fully implement steps taken by the Government of India for environment protection, to save the future.

The President added that the officers of 97th Common Foundation Course are entering the civil services in the Amrit Kaal of India’s independence. In the next 25 years, they would play an important role in policy-making and its implementation for the all-round development of the country.

The President, earlier, also inaugurated several projects today at the Academy including the new Hostel Block and the Mess, as well as Polo Field Arena, the Kartavya Path, the Academy Amrit Telemedicine Consultation Centre, monastery complex and the Walk-Way of Service. She expressed the hope that the new hostel block and the Polo Arena would prove beneficial to the trainee officers. She said that the “Parvatmala Himalayan & North East Outdoor Learning Arena”, the construction of which started today, would act as a knowledge base for civil servants and trainees regarding the Himalayas and North-East Region of India.

It may be recalled that the new Hostel block and the related buildings have been designed by renowned architect of Dehradun, Malvika Ahuja. The foundation stone for this building was laid by Prime Minister Narendra Modi on 27 October, 2017.  Malvika Ahuja has been associated with LBSNAA for a long time now.

Director of the Academy Srinivas R Katikithala briefed the President in detail in relation to these schemes. On this occasion, Governor Gurmit Singh and Chief Minister Pushkar Singh Dhami were also present with her.

Garhwal Post has established itself as a credible, balanced and forward looking newspaper in India. Based in Uttarakhand, the daily is read by the aware, socially and culturally responsible, high-income elite of society.
Contact us: info@garhwalpost.in
https://garhwalpost.in/hookup-scotland/ single and happy