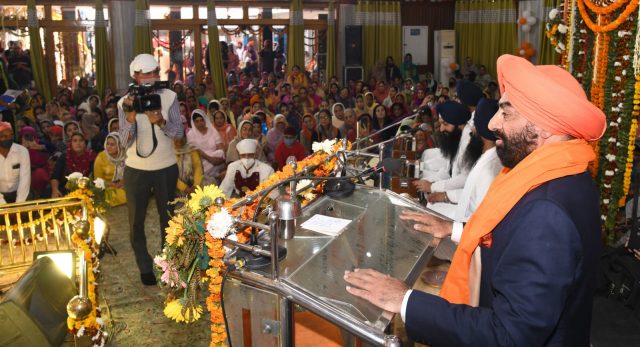 Dehradun, 19 Nov: Governor Lt Gen Gurmit Singh (Retd), today, announced financial assistance for the education of Sikh girls living in an orphanage during the kirtan programme at Shri Guru Singh Sabha Gurdwara, Premnagar, on the occasion of Guru Parv.
The Governor said he wants maximum participation of girls in NDA, CDS, Civil Services. For this, he will encourage institutions providing free coaching facilities.
Governor Singh also expressed gratitude to the Prime Minister on behalf of Uttarakhand and the Sikh society for the decision to reopen the Kartarpur Sahib Corridor.
The Governor visited the Shri Guru Singh Sabha Gurdwara, Premnagar, on the occasion of Guru Parv and participated in the kirtan programme. He appealed to the people present to directly contact the Raj Bhawan for resolution of their grievances, if required.
He added that the light of Guru Nanak Dev’s knowledge illuminates the entire humanity even today. Guru Nanak gave the message of humanism, universal brotherhood, unity and service. He tied the whole of humanity together. He declared that every Sikh has the DNA, blood and thoughts of Guru Gobind Singh. By following the path shown by him, even the biggest goal could be achieved. Fearlessness, courage, humanity, service and compassion were inherited by Sikhs. Today, the entire Sikh community had set an example across the world through its selfless service. They have shown that service to humanity is beyond the boundaries of religion, caste, language and region. The whole world saw the service performed by Sikhs during the Covid period.
He added that it was a matter of pride for him to take on responsibility as Governor of Devbhoomi. This was an honour he shared with the ‘Nanak Naam Leva Samaj’, the Sikh community.
President of the Gurdwara Prabandhak Committee, Premnagar, Bhagat Pal Singh, other members and devotees were present on the occasion.

Garhwal Post has established itself as a credible, balanced and forward looking newspaper in India. Based in Uttarakhand, the daily is read by the aware, socially and culturally responsible, high-income elite of society.
Contact us: info@garhwalpost.in
dating websites free for women https://garhwalpost.in/meet-singles-philippines/