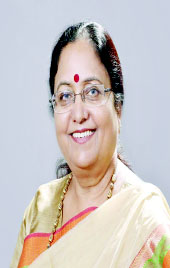 By OUR STAFF REPORTER
DEHRADUN, 25 Jan: Governor Baby Rani Maurya has extended greetings to the citizens of the State on the 70th Republic Day and wished happiness, progress and prosperity for the State. In her message on the occasion, she expressed her respect for the great freedom fighters of the Independence movement, makers of the Indian Constitution, statehood activists and, not least, the brave soldiers dedicated to protecting the motherland.
The Governor said that Uttarakhand state will be 20 years old in 2020. This would be an important milestone. To make this a memorable occasion, all had to work with total enthusiasm and energy for the development of the State and Nation.
Appreciating the women of the State, the Governor said that they had influenced her the most. They were very hard working and patient. Development policies of the State ought to be formulated focusing on the women.
She added that the State Government was working on the industrial development of hilly regions and employment generation. The decision had been taken to develop all the 670 blocks of the State as Growth Centres. Organising the Investors’ Summit in the State was a major achievement in terms of industrial development. “I am confident that these efforts will accelerate the setting up of the industries and employment generation in the State.”
The Governor added that Uttarakhand had always been centre of attraction for tourists from across the globe. Tourism had been a central point of economic development here, which was why Government had given it the status of industry. Now, we tourist spots needed to be developed at par with the destinations at the international level by providing all the basic facilities. Uttarakhand had earned the identity of “Spiritual Eco Zone” as a result of successful organisation of International Yoga Day by the State Government.
The Governor added that the Prime Minister’s health scheme, Ayushman Yojana had been expanded in Uttarakhand and implemented as the ‘Atal Ayushman Yojana’. It had become first State of the Nation to provide free health cover to all its residents. To achieve the target of doubling the income of farmers by 2022, many initiatives had been taken.
“I believe that horticulture, floriculture, medicinal plants and aromatic farming will become a major source of income for farmers in the State,” she added.
The Governor said that use of information technology ensured transparency and speed in public services. So, policy makers of the country had given the slogan of Digital India. To fulfill the dream of Digital India, a Digital Uttarakhand had to be developed also. As a major initiative in this regard, the first HCI technology State Data Centre of the country had been set up in Dehradun.
The Governor added that women and girls made a major contribution to the development of the State. “Importance of daughters is not less than sons in any way. Daughters are setting new milestones in every sector,” she pointed out.
She acknowledged that women self help groups had done excellent work in many parts of the State. “Prasad” made of Kuttu and Chaulai was being made under the Prasad Yojna at Badrinath Dham. She requested all the women of the State to be their own “Shakti” and contribute to a New India and New Uttarakhand.
She also suggested that using modern technology and improving the quality of teachers was necessary for improvement in education. Original research had to be promoted in universities to improve the level. Education needed to be connected with cultural and moral values, also.