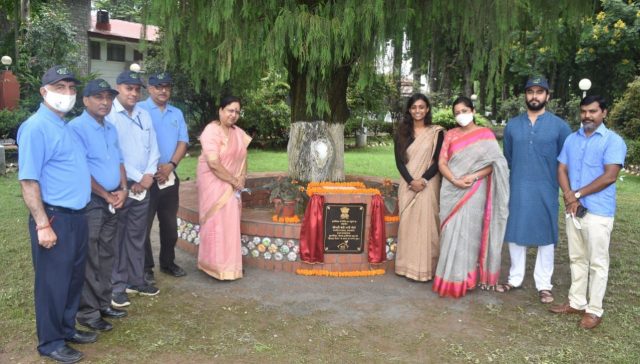 By Our Staff Reporter
Dehradun, 9 Sep: Governor Baby Rani Maurya inaugurated a bandstand made of eco-bricks around the ‘Weeping Cypress Tree’, today, which has been constructed by Eco Group, Dehradun, in the Raj Bhawan premises on the occasion of ‘Himalaya Day’.
As many as 276 eco-bricks filled with plastic waste generated from the house, weighing 74.1 kgs, were used in the construction of the platform.
The Governor said that due to plastic waste, the environment, rivers, streams, fertile land, atmosphere, wildlife and animals are being seriously harmed in various ways. The use of plastic had to be discouraged. This effort of the Eco Group was appreciated by the Governor. She also conveyed her best wishes for such sustainable activity in the future. The Governor also described other such constructions by ‘Eco Group’ as important in the direction of making the Raj Bhawan premises ‘Zero Waste Zones’.
Also present on the occasion were the President, Secretary and all the members of Eco Group, along with the Additional Secretary to the Governor, Jitendra Kumar Sonkar.