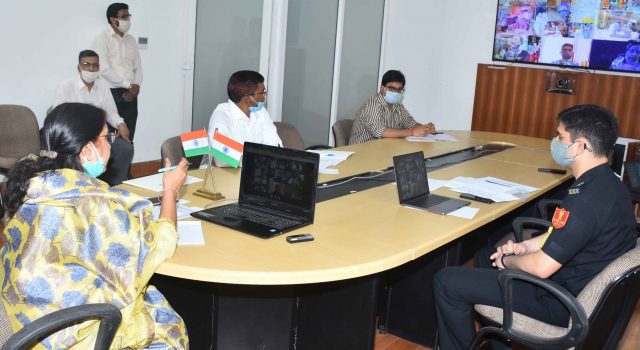 DEHRADUN, 4 Jun: Governor Baby Rani Maurya chaired a meeting of Vice Chancellors of state universities through video conferencing at Raj Bhawan, here, today.
Governor Maurya asked the universities about their action plans for present and coming sessions. She discussed plans for online teaching, status of course completion, teachers, staff and security of students. She asked the Pantnagar and Bharsar Horticulture Universities to work on employment opportunities, agriculture and horticulture in rural areas. She said that skill development curriculum and workshops ought to be designed considering the returning migrants in villages due to COVID-19. She suggested the universities adopt austerity and reduce the dependency on financial aid from the state government.
The Governor also directed all the universities to propose a common platform for online education with mutual coordination.
VC of Pantnagar University Dr Tej Pratap disclosed that a large part of the university campus and hostel had been made a quarantine centre. It would be reused after cleaning and sanitization. He said that there would not be entrance exams as admission would be given on merit basis. All the preparations had been completed for the exams of final year students in August.
VC of the Technical University Dr NS Chaudhary informed the Governor that they were fully prepared to hold the examination of fourth year students of engineering by around 25 July.
VC of Kumaon University Dr NK Joshi said that many of their colleges had been made quarantine centres. As much as 75 percent of the courses had been completed through the online medium. Before the final examination, students would be provided revision of 10-12 days. Kumaon University has set up a skill development course considering the migrants and every teacher would prepare an online syllabus for them. A cell is being set up for the preparation of competitive exams in which senior students would help the juniors. He hoped to hold the examinations in August.
VC of Sridev Suman University Dr PP Dhyani also disclosed that examinations would be held in the end of July, as affiliated colleges had been made quarantine centres. As much as 80 percent of the course had been completed. The examination of last year students would be taken in objective mode using OMR sheets. Acting VC of Doon University and VC of Bharsar Horticulture University Dr Karnatka revealed that courses would be completed by 7 June. Bharsar University is working on high density apple production. The Sanskrit University informed the Governor that its student council had opposed the online examinations and demanded promotion of students without examinations. The University, however, was ready to organise examinations by around 15 July.
The VC of the Medical Education University disclosed that its three medical colleges had been made COVID-19 hospitals. First year MBBS examinations could be organized in September and examinations of second and third years could be held in January 2021. Examinations of nursing and paramedical courses could be held in September-October months. As much as 75 percent of the courses had been completed.