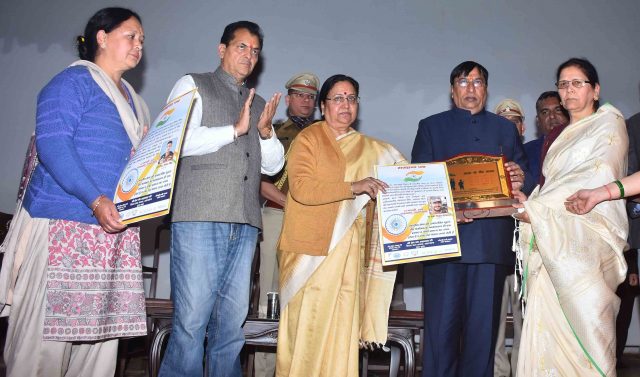 DEHRADUN, 27 Feb: Governor Baby Rani Maurya felicitated family members of the martyrs of Pulwama and Kargil, and SDRF personnel at Raj Bhawan, here, today. She felicitated tSaroj Dhoundiyal, the mother of martyr Major Vibhuti Shanker Dhoundiyal, Surender Singh Bisht, father of martyr Major Chitresh Bisht, Urmila, wife of martyr Major Prem Bahadur Thapa, Brigadier Govind Sidodia, Colonel Rakesh Rana, Captain Devi Prasad Godiyal and personnel of the SDRF. While paying tribute to the martyrs, Governor Maurya said that the nation’s honour is also that of the martyrs. Devbhoomi Uttarakhand was also the land of brave women along with brave soldiers. The sacrifice made by the brave soldiers was invaluable, along with the dedication and resolve of their family members. “We salute the courage and endurance of the brave women,” she declared. “The nation will always remember the supreme sacrifice made by the martyrs.” The Governor also added that the State Disaster Relief Force (SDRF) played a very important role in disaster management works. The SDRF was effectively working on relief and rescue operations in the state. Vidhan Sabha Speaker Premchand Agarwal said that Uttarakhand contributed significantly to the security and defence of the country. The SDRF played a crucial role in ensuring the safety of the state’s citizens. Vice Chairman of the 20 Point Programme Committee Naresh Bansal emphasised that the brave soldiers were an inspiration for all the people. Honey Pathak of ARPIT Foundation, Mukul Sharma, Vipul Garg, army officers and their families, and SDRF personnel were present on the occasion.