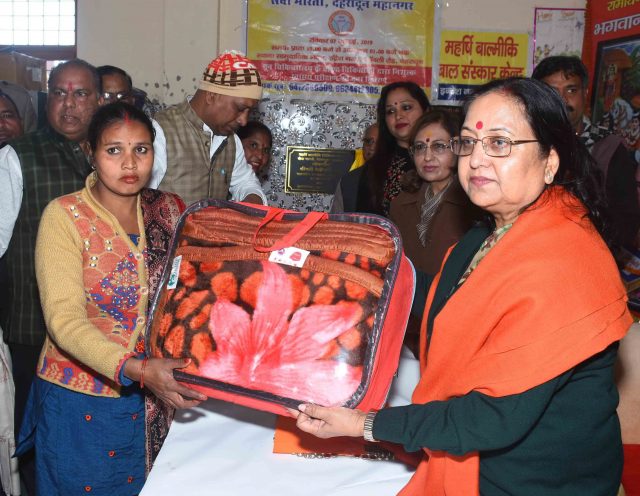 DEHRADUN, 23 Jan: Governor Baby Rani Maurya distributed blankets to 100 women in Indresh Nagar, Kanwali Road, here, today. On the occasion, the Governor also inaugurated a health centre of Seva Bharti. While addressing the people, she said that daughters must be sent to school to ensure they did well in life. She added that educated daughters are the pride of their parents as well as in-laws. Describing female foeticide as a sin and cruel crime, the Governor appealed to women to never discriminate between son and daughter. Daughters were no less than sons. While being welcomed with bouquets of flowers by people, Governor advised that they should have, instead, brought some toffees and biscuits for the children present there. She asked the women to take particular care of their health. She also asked the Seva Bharti Sanstha to organise training programmes to encourage self-employment among poor people. Governor Maurya also paid floral tribute to Maharishi Valmiki and Dr Bhim Rao Ambedkar on the occasion. Officials of Seva Bharti, social workers and local people were among those present.