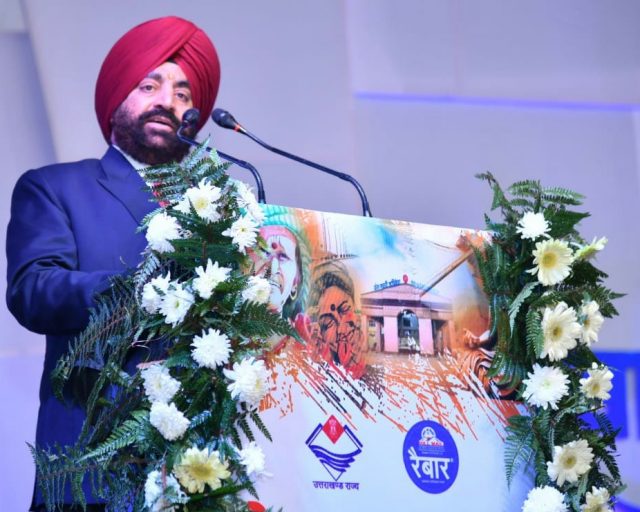 RISHIKESH, 25 Dec: Governor Lieutenant General Gurmit Singh (Retd) said that Raibaar (or message) of reverse migration should spread all over the state. Devbhoomi needs its experienced sons and daughters. Together they will take this state to new heights of development. he said that he strongly believed that the zeal and passion of the youth of Uttarakhand to connect with their soil will prepare the ground for reverse migration. In the mountains of Uttarakhand, women are doing an economic revolution through self-help groups and microfinance. They are role models for the whole country and the world. Governor participated in the Raibaar program organized in Rishikesh on Saturday. The Governor said that Raibaar is a very beautiful word. Raibaar of Reverse migration, economic empowerment of women, connecting with roots should reach the people. Lieutenant General Singh (Retd) while paying tribute to CDS General Bipin Rawat said that”! We are remembering the great son of Devbhoomi, who is no longer with us. Such brave sons, leaders, patriots are rare in history. He was a different kind of warrior. CDS General Bipin Rawat was the pride of our country. His passing is as if everyone has lost someone. The Governor said that I too have lost a colleague in the form of General Rawat. The loss of an NDA squadron fellow is a personal loss for me as well. I had worked with him as a brigade commander in Jammu and Kashmir. Many memories of my military life are associated with him. I had a deep and affectionate connection with him. There were many fortunate moments when we got the opportunity to work together. I invited him to come to the Raj Bhawan on the foundation day of Uttarakhand. He told that on that day an army chief from abroad is coming to India. But General Bipin Rawat reached Raj Bhawan with Madhulika on the state foundation day on November 9. He had a deep attachment with Uttarakhand. His life and work are a source of inspiration for all of us. He devoted every moment of his life to the love of patriotism and service of the country. To be honest, the greatness of the sons of Uttarakhand and Pauri is different and unique. “He was the first CDS of the country. This was a big step for the nation. He Combined and integrated the Armed Forces. He worked for the modernization and transformation of the army.” The Governor said that today the people of Uttarakhand have made a different identity in the country and the world by their work. Uttarakhand, which has completed 21 years, is now a young state and is eager to gain momentum on the path of development. Prime Minister Narendra Modi had also recently told at Kedarnath that the third decade of the 21st century would belong to Uttarakhand. The state government is also speeding up development works. A lot of work is being done on the infrastructure front and its results will also come in the coming days. The Governor said that Uttarakhand is the land of soldiers, land of brave warriors. There is no house here which is not related to any soldier. Lt-General Singh (Retd) said that after assuming the responsibility of the Governor of the state, I have tried to communicate as much as possible to the ex-servicemen. The Raj Bhawan is always open to the soldiers serving the country. Cabinet Minister Subodh Uniyal, NTRO Chairman Anil Dhasmana, Rajendra Singh, Central Film Censor Board Chairman Prasoon Joshi were present on the occasion.