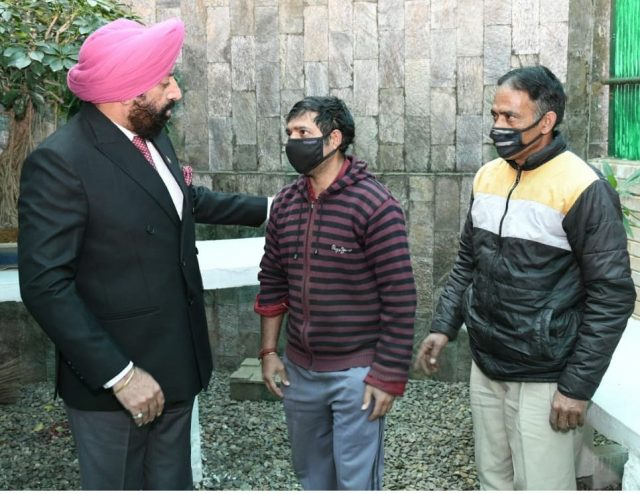 DEHRADUN, 18 Dec: Governor Uttarakhand, Lieutenant General Gurmit Singh (Retd) today planted Tulip bulbs at Raj Bhawan as per tradition. It is noteworthy that this year 4000 bulbs of 7 species of tulips are being planted in Raj Bhawan. These bulbs will remain in flowering till the spring festival of 2022. As per the instructions by the Governor, this year a selfie point is being developed near the Tulip Garden where visitors can take selfies during Vasantotsav 2022. The Governor said that the farmers in the hilly areas of Uttarakhand should be specially encouraged for the production of tulips. Tulip, one of the most expensive flowers in the world, is in great demand in the international market. More and more possibilities of commercial cultivation of this attractive flower should be explored in the hilly areas of Uttarakhand. He added that through tulip cultivation, the income of the people of hilly areas would increase and reverse migration would be encouraged. Promotion of floriculture will increase employment opportunities in the hilly areas of the state. As per his instructions Badrinath Dham Pushpa Vatika, Kedarnath Dham Pushp Vatika, Gangotri Dham Pushp Vatika, Yamunotri Dham Pushp Vatika, Hemkund Sahib Pushp Vatika, Nanakmatta Sahib Pushp Vatika and Sainya Dham Pushpa Vatika are being developed. In these flower gardens, the soil brought from the above dhams has been mixed. Along with this, the Governor has directed the Horticulture Officer Deepak Purohit to construct a rock garden at Raj Bhawan. The Governor directed that the best practices being done in natural and organic farming in other states should be started as an experiment in Raj Bhawan and the farmers of the state should be motivated for this. He has instructed the Horticulture Officer to prepare an action plan in this regard soon. He directed that seeds of various plants being developed in GB Pant Agricultural University, Pantnagar should be planted on an experimental basis in Raj Bhawan so that in future common people and farmers can become aware about the possibilities of their propagation through Raj Bhawan. It is noteworthy that for the first time tulips were planted in the Raj Bhavan premises in the northern Iran, Afghanistan and some other countries of Asia. Tulip gardens have also been developed in hilly districts like Chamoli and Pithoragarh of Uttarakhand. year 2015 by the then Governor. At that time only 200 bulbs were planted as an experiment, the result of which was encouraging. After this, 500-500 bulbs were planted in the year 2016 in 2017 and 2000 in the year 2018. Horticulture Officer Deepak Purohit informed that tulip flowers are usually found in areas above 6500 feet. This plant, which blooms in spring, is naturally found in the cold areas of Holland, China, Japan, Turkey, On this occasion, the Governor met the gardeners and laborers working in the Raj Bhawan gardens and inquired about their well being and that of their families. The Governor praised the hard work, skill and dedication of the garden workers and directed to reward them.