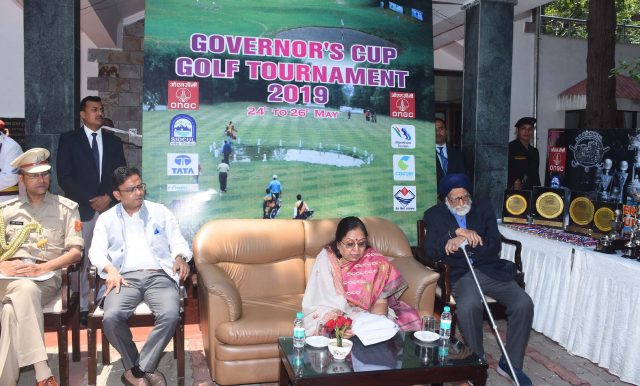 By OUR STAFF REPORTER
Nainital, 21 May: Addressing a curtain raiser on Tuesday at the Raj Bhawan Golf Course here, today, Governor Baby Rani Maurya apprised that the 17th Governor’s Cup Golf Tournament will be held from 24 to 26 May.
A total of 117 golf players have been registered for the competition.
Governor Maurya said that Golf was generally considered a sport of the elite and wealthy people, but Golf Competitions of the Raj Bhawan had connected the sport with the common people and school students. Local youths working as caddies are also being promoted and a caddy tournament is also held.
She said that tourism in Uttarakhand, particularly District Nainital, was also being promoted through this Golf Competition.
Cultural programmes will present Harul, Chhapeli and Chholiya folk dances on Saturday at the Raj Bhawan.
An inter-school Golf Competition was organised, here, in April. Winners of this competition will also be awarded on 26 May. After the Governor’s Cup, Junior and Sub-Junior National Competitions will also be hosted by the Raj Bhawan Golf Course.
Ramesh Kumar Sudhanshu, Secretary to the Governor, was also present on the occasion, along with several other dignitaries.