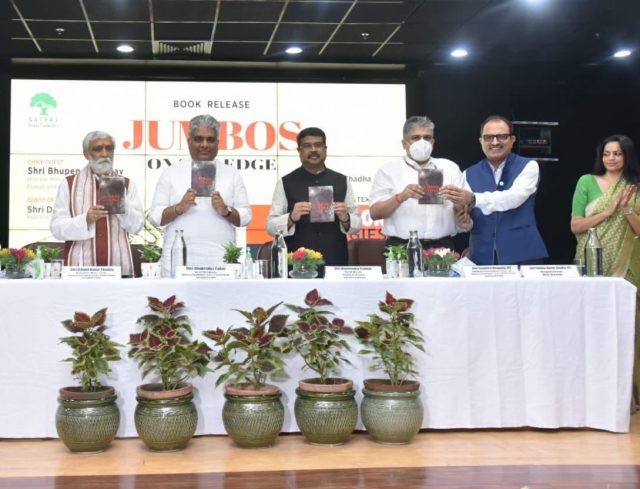 By Our Staff Reporter
New Delhi, 30 Sep: Union Minister of Environment, Forest and Climate Change, Bhupendra Yadav said on Wednesday that the focus of the government under the leadership of Prime Minister Narendra Modi is not just increasing the tree and forest cover in the country quantitatively but, more importantly, also qualitatively.
Yadav was speaking at the launch of “Jumbos on the Edge: The Future of Elephant Conservation in India”, a book by Sanjeev Kumar Chadha, an Indian Forest Service officer currently serving as Managing Director of National Agricultural Cooperative Marketing Federation of India Ltd (NAFED). Dharmendra Pradhan, Union Minister of Education, Skill Development and Entrepreneurship was also present. The book has been published by Natraj Publishers, Dehradun, and the launch was held in Delhi, on the eve of the wildlife week celebrations.
Speaking on the Human-Elephant conflict and the measures taken by the Project Elephant division with Elephant range states, Yadav emphasised on people’s awareness and participation as a crucial step in managing and conserving, both, flora and fauna of the country while ensuring life and livelihood.
“The Environment Ministry is not an obstacle but a solution provider,” said Yadav while elaborating on the role played by Ministry of Environment as an enabler of sustainable growth and development. He congratulated the author, who having spent a lifetime in the forests across India has brought the learnings and research together in the form of a book.
Minister Dharmendra Pradhan, recollecting incidents of human elephant conflict in his native state of Odisha, stated that the case studies and suggestions brought forward in the book would help all stakeholders involved to incorporate a more holistic approach to development.
The Indian Elephant (Elephasmaximus) is a keystone species and an integral component of ecosystems, playing a crucial role in maintaining the forest ecosystem and biodiversity. It has been recognised as the National Heritage Animal of India and highest degree of protection has been given under the Indian Wildlife Protection Act (1972). India has the largest population of Asian Elephants with 30,000 wild and about 3600 captive elephants.
Human-elephant conflict is a major conservation concern in elephant range states in India. Human-Elephant Conflict (HEC) refers to the negative interaction between people and elephants, leading to a negative impact on people or their resources such as human death and injury, crop damage, loss of property, apart from affecting their emotional well-being, and on the elephants or their habitats.
The event was attended by Ashwini K Choubey, MoS for MoEF&CC, Soumitra Dasgupta, ADG (WL), Dr SP Yadav, ADG (PT) and Member Secretary (NTCPA), and Dr Dhananjay Mohan, Director, Wildlife Institute of India, Dehradun.