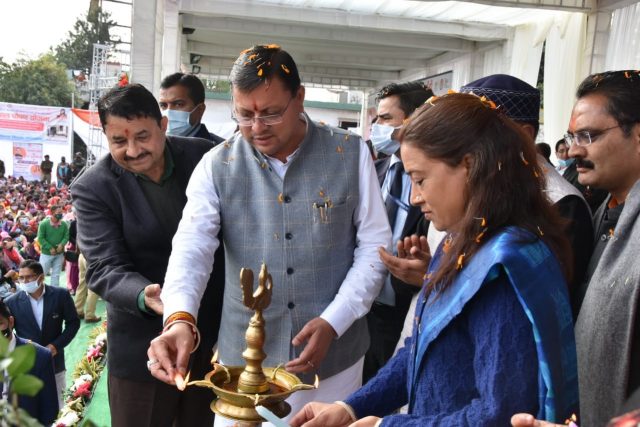 DEHRADUN, 6 Dec: Chief Minister Pushkar Singh Dhami participated in a programme organised by the Department of Women’s Empowerment and Child Development at SD Inter College in Race Course here today. Here the CM was warmly welcomed by the Anganwadi organisation and the Anganwadi workers expressed their gratitude to the CM for increasing their honorarium. The Chief Minister announced on the occasion that an annual accident insurance policy of Rs 2 lakhs would be provided to all Anganwadi workers. He added that the monthly honorarium of Anganwadi workers would be given to them digitally directly in their account. The CM further promised that 25 percent of the posts of Anganwadi workers would be filled by Anganwadi helpers who had completed 10 years of satisfactory service and on the basis of fulfilment of the required educational qualifications. A total of 20 kg food grains/per card would be provided every month from December 2021 till March 2022 to the people in the state who were not covered under the National Food Security Act. He announced that the one rupee which had to be paid for purchase of sanitary napkins through Anganwadi centreswould now be provided free of cost. Dhami said that womenhad a big role in the development of Uttarakhand and that the state government was running many programmes and schemes aimed at the women empowerment. He reminded that the Women had played a crucial role in the Uttarakhand state building movement. The government was working as a partner of the people. In the last five months, the government had taken more than 500 decisions in public interest and the orders towards their implementation had also been issued already. The Chief Minister said that it was the endeavour of his government that by 2025, the state became a leading state in every field. To promote sports, a new sports policy had been formulated in the state. Plans were being made keeping in mind every category. The Chief Minister said that the Anganwadi workers had worked hard and the state was indebted to them for this. The State Government had tried to repay this loan by increasing their honorarium. He reminded that everyone knew very well how Anganwadi workers worked in adverse conditions. The Chief Minister said that the elementary education of both his children had also been done in the Anganwadi Centre and he was well aware of the hard work of the Anganwadi workers. Empowerment of women was necessary for the development of the state. Commendable work was being done by women self-help groups in the state. The Chief Minister said that after the Corona period, the income resources of the government had also decreased, but despite this, the government did not hesitate while increasing the honorarium. The government released a Covid relief package of Rs 119 crore to strengthen the women of the state engaged in livelihood. Apart from this, the government had increased the honorarium of employees working in all departments including Asha, UPNL. Cabinet Minister Rekha Arya said that Anganwadi workers played an important role in various activities in the state. Support was given by Anganwadi workers in every field. All possible work was being done by the state government in the interest of Anganwadi workers. Many schemes were being run by the Union and State Governments in the field of women and child development. In the last five years, considering the Anganwadi centres as the pivot of health and nutrition at the village level, many facilities such as gas cylinders, drinking water, toilets, sanitation kits, pre-school kits, medicine kits and kitchen gardens had been provided in the Anganwadi centres. As a result of the strong and active presence of Anganwadi workers at the village level, nutrition was provided to about 9 lakh beneficiaries every month through Anganwadi centres. On this occasion MLA Umesh Sharma Kau, Mahendra Bhatt, Bharat Chaudhary, Secretary Women and Child Development HC Semwal, convenor of the programme toda DrKanchan Negi, departmental officers concerned and a large number of Anganwadi workers were present.