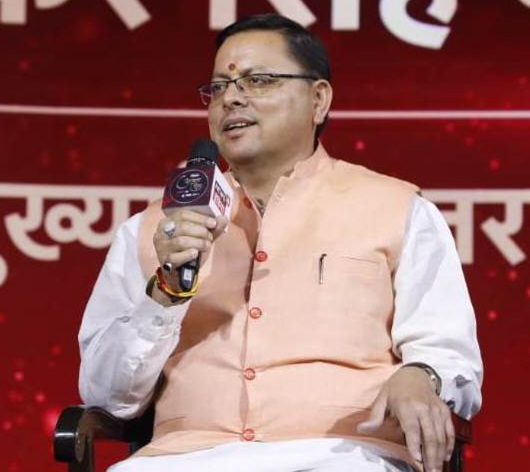 NEW DELHI, 2 Aug: Chief Minister Pushkar Singh Dhami participated in the ‘Amrit Ratna’ programme organised by ‘News18 India’ at Hotel Taj Palace, New Delhi today. On this occasion, Dhami shared his views on various subjects of the state. Pushkar Singh Dhami said that under the leadership of Prime Minister Narendra Modi, work has been done very fast in respect of improving road and air connectivity in Uttarakhand. The journey to the hills has become very convenient. Reaching Delhi from Dehradun by road was now possible under 4 hours, whereas after the completion of the under construction elevated road, this journey would be reduced to just around 2 hours.

Dhami claimed that the Prime Minister had a special attachment to Uttarakhand. Under the direction of the Prime Minister, the state government was working on many important schemes. According to the vision of the Prime Minister, the work of reconstruction in Kedarnath Dham has been progressing rapidly. Similarly, work has also started on the master plan of Badrinath Dham. Work would also be done on Manaskhand Mandir Mala Mission for connecting the ancient temples in Kumaun region. Just as Modi had taken the resolution of a new and self-reliant India, in the same way, Uttarakhand has also taken the resolution of Navnirman Uttarakhand.

Speaking about the proposed Uniform Civil Code law in the state, the Chief Minister said that Uttarakhand, being the state of Mother Ganga, was a militarydominated state and was strategically important as it was a border state. Keeping this in mind, his government has promised the people of Uttarakhand that the implementation of the Uniform Civil Code would be a top priority for the government. For this, a committee has been formed, two meetings have already been held. The committee would speak to all the stakeholders for this. Uttarakhand is a centre of religion, culture and spirituality. It ought to have one law for all. It was his resolve that the government would implement it. The Government was working on the principle of ‘Sabka Saath, Sabka Vikas’, ‘Sabka Prayaas’. The government would take strict action agaist illegal construction, illegal activities.

The Chief Minister expressed his gratitude to Prime Minister Narendra Modi and the central leadership of the party as well as to the people of Uttarakhand for giving an opportunity to a soldier’s son to work as the chief servant of the state. The Chief Minister said that his relationship with Khatima did not end with his defeat from there in the assembly election and that he was first chosen MLA by the people of Khatima only and he would continue to work for Khatima’s development. Dhami said that the government has resolved to make Uttarakhand an ideal state in every field by the year 2025. It would not be possible only by focussing only on one or two assembly constituencies but only by focussing on and developing entire Uttarakhand. The government was working on taking both economy and ecology together in the state. Whatever was necessary for the development of Uttarakhand, the government would do it.

When asked about the benefit of the state from the double engine, the Chief Minister said that Prime Minister Narendra Modi’s government at the Centre was fully aware of what was the need of Uttarakhand. Whatever the needs of the state were, the Centre was willing to work on them. In the past five or six years, schemes worth more than 1.50 lakh crore were approved for Uttarakhand by the Centre. They included Rishikesh-Karnaprayag rail project, AIIMS Rishikesh, Chardham Road project, better connectivity of road etc and they had been possible only with double engine government. After the year 2014, a new work culture was witnessed across the country. Its effect was being seen in Uttarakhand also. The development of Uttarakhand was now happening at a rapid pace and that the state was receiving full cooperation from the Centre. In Rishikesh AIIMS, thousands of people were getting quality treatment facilities. Its satellite centre would also be soon established in district Udham Singh Nagar. CM Dhami said that under the leadership of Prime Minister Narendra Modi, schemes intended for welfare of the poor were made and implemented. The work done by the Centre at the time of Covid pandemic was appreciated by the whole world. Free covid vaccination was done. Free ration was being given to 80 crore people in the country for two years. The people of the country felt that the government of Prime Minister Narendra Modi was their guardian. This was the reason why the BJP was getting the blessings of the public.

On the issue of Gairsain, the Chief Minister said that the government had declared Gairsain as the summer capital. Gairsain was the centre of all possibilities and feelings, and development was being done there in a systematic manner. Expressing his views on the Agnipath scheme, the Chief Minister said that Uttarakhand was a state that ran along with the rest of the country. Every family here was associated with the army. Uttarakhand had welcomed the scheme. In Uttarakhand, recruitment examination will be conducted in Kotdwar and Pithoragarh in which thousands of youth are expected to participate.

Garhwal Post has established itself as a credible, balanced and forward looking newspaper in India. Based in Uttarakhand, the daily is read by the aware, socially and culturally responsible, high-income elite of society.
Contact us: info@garhwalpost.in
https://garhwalpost.in/omaha-ne-hookups/