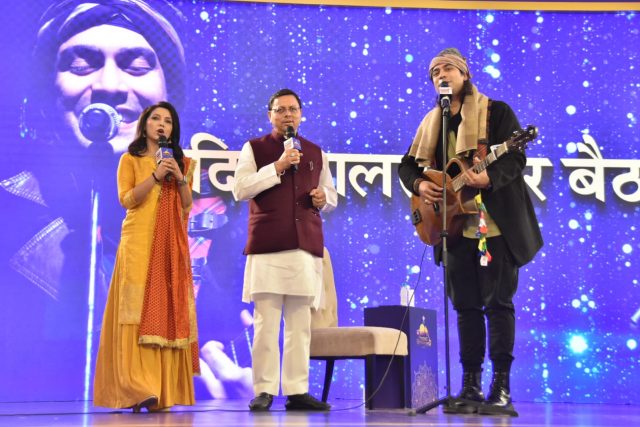 DEHRADUN, 27 Nov: Chief Minister Pushkar Singh Dhami attended the ‘Rising Uttarakhand’ programme, organised by ‘News 18’ channel at GMS Road late in the evening on Friday. While felicitating singer Jubin Nautiyal, the Chief Minister not only described him as the pride of entire Uttarakhand but also sang along with him the famous song of Uttarakhand, “Bedu Pako Baramasa”. Speaking on the occasion, Dhami claimed that he was fully dedicated towards working for the welfare of the people and the state and towards its development. It may be recalled that more than 400 announcements have been made by him in the interest of the state and necessary funds have also been issued related to their implementation in past four and half months since Dhami took over as the CM. The Chief Minister said that Uttarakhand had now become a youthful state after two decades of establishment of the state. In the last two decades, continuous efforts had been made for the development of the state, the effects of which were also visible on the ground. He added that it would be the endeavour of him and his party to associate people from different sections of society and subject experts with the government in order to create a far-reaching plan for the allround development of the state. For this, through self-reliant Uttarakhand Bodhisattva thought series, effort was being made to associate subject experts and enlighten people from different fields as allies of the government towards determining the framework for the all-round development of the state. For this a thought chain has been started. Dhami said that all would have to work together to make Uttarakhand a leading state in all fields by 2025. The roadmap for the future would be prepared keeping in mind whatever suggestions would be received from the experts from various fields. The Chief Minister said that with the guidance of Prime Minister Narendra Modi and with the cooperation of the Union Government, many such works have been done in the State which earlier seemed impossible. In the last four and a half years, various projects worth more than one lakh crore rupees have been approved by the Union Government for the state. Many of these projects have been completed and work was going on in respect of others. The people dreamt of railways in the hills, but never thought that it would really come true. But Modi Government was turning this dream into a reality now. The work on RishikeshKarnprayag rail project and strategically and geographically important Tanakpur-Bageshwar rail project was progressing rapidly. Similarly, work was also being done on Char Dham All Weather Road, Bharat Mala Project at a fast pace. Char Dham Yatra was the lifeline for Uttarakhand and these projects would facilitate Char Dham Yatra, promote tourism and bring revolutionary changes in the state’s economy. Expressing gratitude to the Chief Minister of Uttar Pradesh, Yogi Adityanath for his cooperation in the fair final distribution of assets between Uttar Pradesh and Uttarakhand, which had been pending for past 21 years. Dhami reminded that talks had been going on with Uttar Pradesh for sharing of assets, but no agreement could be reached in respect of these pending issues. However now, with a strong desire and will power on part of him as well as on part of the UP CM, a pointby-point agreement was reached regarding the distribution of assets during the CM level meeting. Dhami reminded that in the important meeting held recently in Lucknow, it was decided to transfer the land of the bus stand of Uttar Pradesh Irrigation Department in Kichha to Uttarakhand within 15 days. Apart from this, it has also been decided to give the payment of the remaining bills of Rs 90 crores of forest department to Uttarakhand by the Uttar Pradesh government immediately. Permission was given for tourism and water sports in Dhaura, Baigul, Nanak Sagar reservoirs located in Udham Singh Nagar district. Water sports were also allowed in the Upper Ganges Canal. The Alaknanda Tourist Accommodation House at Haridwar would be inaugurated in December 2021 and the former Tourist Accommodation House would be finally transferred to Uttarakhand. It was decided in the meeting that identification of 5700 hectares of Irrigation Department land and 1700 houses would be done soon after conducting a joint survey to assess the land and building required for the use of Uttar Pradesh Irrigation Department. It was agreed between the two states that various cases pending in the courts would be withdrawn and the cases would be resolved by mutual consent. Two barrages, Banbasa barrage on Indo-Nepal border and Kichha barrage which were in dilapidated condition due to damage due to disaster, would be reconstructed by Uttar Pradesh Irrigation Department. Uttar Pradesh Transport Corporation agreed to pay Rs 205 crores to Uttarakhand Transport Corporation. The income and liabilities arising from the disposal of the assets of Uttar Pradesh Housing and Development Council located in Uttarakhand would also be divided in the ratio of 50-50 percent between the two states. He described it as a big achievement for the state. The Chief Minister claimed that Gairsain was an emotional issue for all Uttarakhand and added that every effort would be made for the development of summer capital Gairsain. He added that his government’s efforts were to connect the youth with self-employment and employment. Decision has been taken to fill the long pending 24 thousand posts in the state and that the process for appointment on 12,000 posts has already begun. Many decisions have been taken in the interest of teachers, personnel as well as representatives of Panchayats. He said that after studying the report of the high level committee constituted regarding Devasthanam Board, an appropriate decision would be taken in this regard. He said that our effort was to make Uttarakhand the best place in the world.