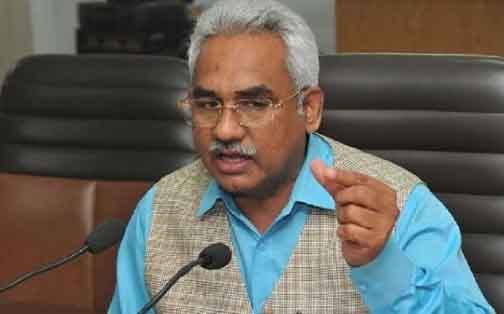 By Arun Pratap Singh
Dehradun, 25 Jun: Senior Congress MLA from Jageshwar, Govind Singh Kunjwal and other Congress members today pressed for immediate discussion by suspending the house proceedings under Rule 58 of the State Assembly Procedure Regulations over the alleged harassment of the public done by various development authorities across the state. Pressing for discussion under Rule 58, Kunjwal claimed that the common person of Uttarakhand was being harassed no end by the various development authorities across the state. He added that, even in the rural areas, these development authorities were holding back permission for construction of houses under various pretexts. He added that, in the past, no permission were required in the rural areas for the villagers to construct residential houses. But after the rural areas too coming under the jurisdiction of the development authorities, it had become very difficult for the common man to obtain permission in time. He further claimed that the officers posted in various development authorities had turned these institutions into money spinners for themselves. It would not be wrong to stress that the officials were corrupt and, for obvious reasons, they were not according sanction to applications long pending for construction of houses.
Deputy Leader of the Congress Legislative Party, Karan Mahra claimed that people were facing undue harassment from the development authorities.  A recent judgement banning construction of buildings falling within 200 metres from the national highways and state highways had created another opportunity for the development authority officials to harass people. In the hills, it was impractical to ban construction within the 200 metre radius of the national highways or state highways. The state government ought to have pursued the case in the Supreme Court to get it suitably amended. Reminding the Speaker of the directions given by him to the government to review the functioning of the development authorities and for constitution of a committee of members of the House to look into the problems faced by the people and recommend changes in the functioning of these development authorities, he alleged that nothing had been done despite the direction of the Chair. He demanded a complete stay on the functioning of the development authorities till the committee to be constituted in this respect submitted its report of findings and recommendations.
Leader of the Opposition Indira Hridayesh claimed that not only in the hills, even in the cities like Haldwani and Haridwar, applications for sanction of construction were pending for months and years and she being the local MLA of Haldwani, received such complaints on a daily basis. She urged the Urban Development Minister to seek information from various development authorities on long pending applications for approvals and seek reasons why they were pending for so long. She stressed that development authorities had turned into hubs of corruption and something needed to be done to tackle this problem in a positive manner.
Responding to the notice served under Rule 58, Urban Development Minister Madan Kaushik claimed that the government was serious in this matter and to minimise the harassment and confusion faced by the people, the government had reduced the number of development authorities in the state from 23 to 13 through mergers. Now a single district development authority was working in each district. In addition, the government was charging map approval fee in the hills at thirty percent of the charges applicable in the cities. He added that the government was serious about tackling corruption in the development authorities and would welcome even individual complaints in respect of corruption and take strict action based on these complaints. He added that despite all the initiatives taken by the government to minimise corruption in the development authorities, it was willing to review the functioning of these authorities based on the recommendations of the house committee to be constituted in this regard.
At this point, BJP member Munna Singh Chauhan raised a point of order and stressed that since the solution to the problem could emerge only from the implementation of the recommendations of the house committee to be constituted in this respect, it would be advisable to constitute the committee without any further delay and fix a short deadline for the committee to study the matter and submit its report in this respect.
Following this, the Speaker ordered the constitution of the committee at the earliest and declared the notice served by the Opposition members as inadmissible under Rule 58.
During Zero Hour, another notice under Rule 58 was accepted by the Speaker to be heard on admissibility regardings reservations for the state agitationists and their families in government jobs. The notice had been given by Pritam Singh, Rajkumar and Karan Mahra. Singh reminded the Speaker that he had directed constitution of a committee to study the problems being faced by state agitationists and their families since many of them were still struggling and were agitating to get due facilities and benefits of reservation in government services. Singh said that the Chair had directed the government to come up with a clear policy for the welfare and benefit of the state agitationists and the dependants of the martyrs. But the government had not come up with any such policy. Responding to the charges, Parliamentary Affairs Minister Madan Kaushik claimed that the government was serious about the welfare of the state agitationists and their families since it was because of their sacrifices that Uttarakhand was created. He added that the government had provisioned for 10 percent horizontal reservations to the state agitationists or their dependants in government jobs but the court had struck it down. Other welfare schemes targeted at them were in place and they included free treatment of various diseases and free travel in state transport buses.
On the second day of the Session, private bills and notices were tabled in the House under Rule 53. In addition, the government also tabled an amendment bill for the Uttarakhand Ayurveda University in the wake of points raised by the Governor regarding the original bill.