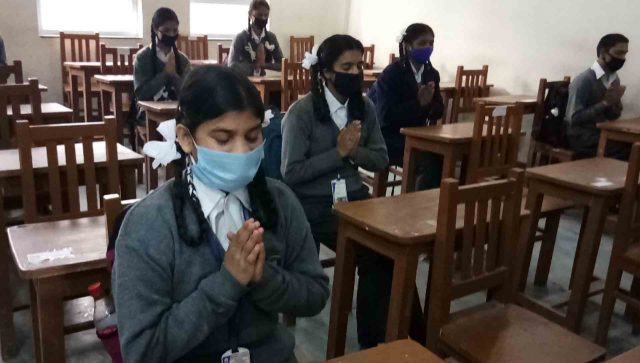 By Our Staff Reporter
Mussoorie, 2 Nov: After the state government’s instructions in this regard, all the government schools here opened today. Private schools, however, have elected to remain closed till after the winter vacations. Government schools claimed that all arrangements had been made regarding safety standards.
Principal of RN Bhargav Inter College, Anuj Tayal said that all Hindi medium schools have opened in Mussoorie. On the first day, about 50 percent of students were present in all schools. He said that all the government guidelines are being followed inside the school.
The Principal said that children are being called to school with the permission of parents. Manoj Rayal, Principal of Mahatma Yogeshwar Saraswati Shishu Mandir Inter College, said that adequate arrangements had been made for the safety of students in the school. The school is being operated in two shifts. Private schools will be closed till February, while classes 10 and 12 will resume in January, so that the students may be prepared for board exams.