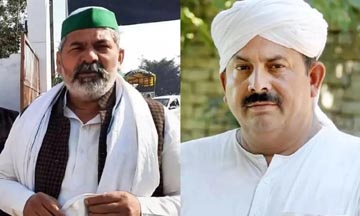 By Our Staff Reporter
Dehradun, 26 Nov: A Mahapanchayat of farmers was held in Dehradun today and it was addressed by farmer leader and President of Bharatiya Kisan Union (Tikait) Naresh Tikait, brother of Rakesh Tikait. He claimed that the farmers were very angry with the government for not fulfilling their various demands. He added that the Mahapanchayat was being held to give voice to their anger.
Tikait and other speakers said that the main demands of the farmers included the demand that the government guarantee MSP for all crops. Apart from this, farmers were continuously demanding loan waiver. They said that the farmers had committed suicide in large numbers across the country as they were debt ridden and therefore the demand for loan waivers was fully justified. The government ought to come forward and waive the loans given to the farmers. Tikait said that because of government apathy, the farmers were facing huge losses in crops every year and therefore an effective and comprehensive crop insurance scheme was required to be implemented by the government, not just a nominal crop insurance scheme.

Tikait claimed that the condition of farmers in Uttarakhand was worse than in Uttar Pradesh. Neither were they getting the payment of sugarcane arrears on time, nor were they getting proper compensation for their land. He lamented that even when the farmers sat on the road, there was no one to listen to their problems, making them feel ashamed. They did not know where else to go to make the authorities listen to their problems. Tikait also said that there was an urgent need for the government to save and protect the farmers, but the government had turned a blind eye to their problems. He praised the Pushkar Singh Dhami Government and said that Dhami Government was doing good work but he lambasted the Modi Government for “ignoring” the problems of the farmers. After the Mahapanchayat, a memorandum of demands was handed over to the administration by the farmers. The memorandum was addressed to the President and was submitted to the local administration to be forwarded through the Governor of the state.

Garhwal Post has established itself as a credible, balanced and forward looking newspaper in India. Based in Uttarakhand, the daily is read by the aware, socially and culturally responsible, high-income elite of society.
Contact us: info@garhwalpost.in
safe gay dating apps