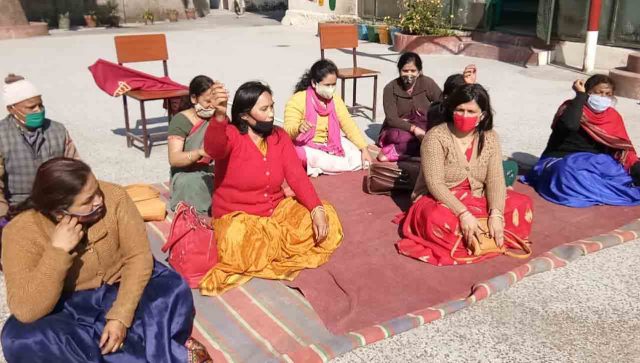 By Our Staff Reporter
Mussoorie, 11 Nov: Teachers and employees working in the secondary schools of Uttarakhand under the banner of the Uttarakhand Secondary School Teachers’ Association, including those of Mussoorie Sanatan Dharma Inter College, Nirmala Inter College, RN Bhargava, St Lawrence School, Mussoorie Girls Inter College, demonstrated against the government and boycotted work to protest non-payment of salaries.
The teachers said that they are facing huge problems due to lack of salary in the festive season. The government was discriminating against teachers of schools. The salaries are not being paid on time. They warned they would keep agitating against the government and boycott work till the government prepares an action plan on paying them their outstanding salaries.
Present on this occasion were Uttarakhand Secondary Teachers’ Association Vice President Samuel Chandra, Archana Rani, Neeraj Gupta, Arpana Singh, Amit Kumar, Nagendra Dutt, Sunita Bisht, Rashmi Bisht and others.