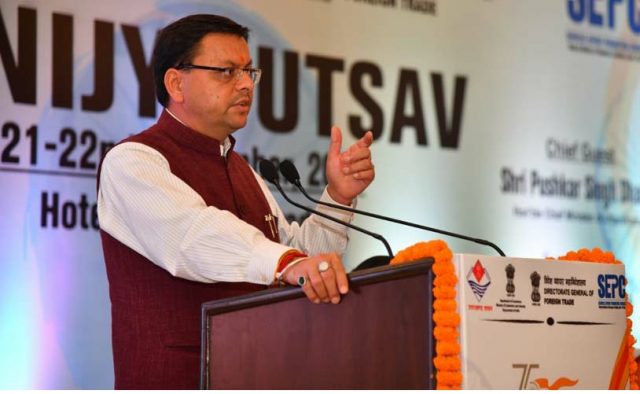 By Our Staff Reporter
Dehradun, 21 Sep: Chief Minister Pushkar Singh Dhami claimed today that Uttarakhand had become a preferred investment destination in North India due to its progressive policy framework. He was speaking as the Chief Guest at the ‘Commerce Festival’ held as part of the Amrit Mahotsav of Independence at a local hotel today. The festival was organised by the Industries Department. 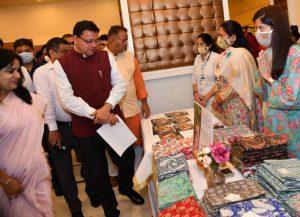 The Chief Minister said that availability of quality manpower, and the satisfactory law and order situation in Uttarakhand were added advantages for the investors here.
He pointed out that the manufacturing sector contributed more than 36 per cent to the state’s GSDP. The government was also focusing on improving the contribution of the services sector to its economy and reminded the audience that the tourism sector also had been accorded the status of industry in the state. He emphasised that Uttarakhand was one of the top states in the Business Reform Action Point Rankings conducted by the Department for Promotion of Industry and Internal Trade (DPIIT). The state’s investment promotion agency had been adjudged the best performer by ‘Invest India’. Efforts were also being made to set up an Inland Container Depot (ICD) in Haridwar.
Dhami reminded that the state had also identified important sectors such as agriculture, health and AYUSH, pharmaceuticals, automobiles & allied sector, tourism & hospitality, handlooms & handicrafts, educational services, among others, to boost exports. He said that the state aimed to achieve an ambitious target of exporting goods worth Rs 30,000 crore per annum.
Dhami said that Uttarakhand had achieved more than double the growth in exports during the past five years alone. In the year 2017-18, Uttarakhand had exported goods worth Rs 10,836 crore, while in 2020-21, the exports had gone up to Rs 15,914 crore. Automobile and pharma units had emerged as the largest exporting sector in the state. Apart from this, Uttarakhand also exported flowers, agricultural produce and processed food products, organic products, aromatic and medicinal plants, biotechnology, handicrafts items to other countries. Organising the commerce festival would prove to be a milestone in transforming the state as an emerging economic power to promote and showcase the export potential of the state and exportable products and services from the state.
The Chief Minister said that work was being done on many schemes under the guidance of Prime Minister Narendra Modi. Various schemes were being operated for skill development of the youth, so that they could get better employment opportunities while the industry could get energetic and skilled youthful manpower. Dhami claimed that India was well on the path of becoming a self-reliant nation under the leadership of the Prime Minister. The Union and the State governments were working with a strong will to take the state ahead.
The CM also asserted that the entrepreneurs would be the brand ambassadors of Uttarakhand for the establishment of more industrial enterprises in the state. The state government was working on the mantra of simplification, providing early solution and quick disposal of files. The government was committed to resolving the problems of entrepreneurs associated with the industries in a proactive manner. The government was also eager to provide all possible help to promote industries. Dhami said it was commendable to organise Commerce Week at such a time when the country was celebrating Amrit Mahotsava. The objective of the commerce festival was to focus on economic development and to promote exports especially from India. Despite the difficult geographical conditions and many transport constraints, the state of Uttarakhand was growing rapidly in terms of exports year after year. This was the reason that in the Export Preparedness Index released by the Union Government, the state of Uttarakhand had been ranked first in the category of Himalayan states.
Industries Minister Ganesh Joshi said that Uttarakhand was rapidly emerging as an industrial destination for industrialists from across the world. The government’s dialogue with the industrialists of the country was a continuous one. Under the Mukhyamantri Swarozgar Yojana, work on setting up small industries was being done rapidly in the state and all possible efforts were being made by the government to overcome the problems related to industries.
On this occasion, Secretary Industries Radhika Jha, Deputy Secretary, Government of India, Ministry of Commerce, Anand Bhashkar, DG SEPC Dr Abhay Sinha, Director, Industries, Sudhir Chandra Nautiyal, Export Commissioner Rohit Meena and office bearers of Industry Associations were present.