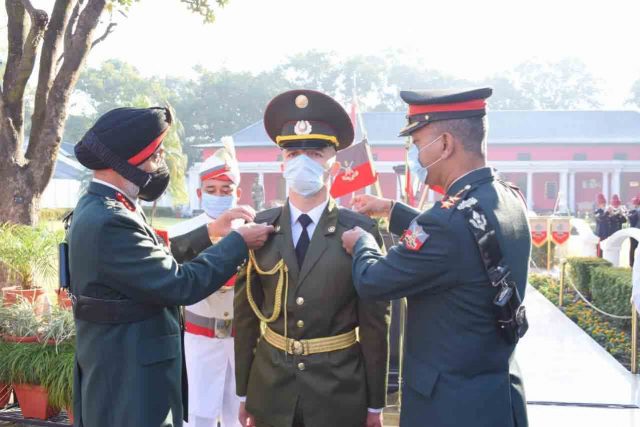 Dehradun, 4 Dec: The Army Cadet College is an integral feeder wing of the Indian Military Academy. The college was established with the aim to train and induct deserving soldiers into the officer cadre. A total of 31 Cadets of the Army Cadet College (ACC) Wing graduated today and were awarded degrees during the presentation ceremony at the renowned Khetarpal Auditorium of the Indian Military Academy. These degrees were conferred on the Cadets by the prestigious Jawaharlal Nehru University, New Delhi. Amongst the 31 Cadets, 11 graduated in Science Stream and 20 in the Humanities Stream. The ceremony was presided over by Lt General Harinder Singh, Commandant, Indian Military Academy. The Army Cadet College has a rich history of training selected personnel from other ranks of all the three Services who display potential to become officers in the Indian Army. After three years of training at the Army Cadet College, the Cadets of the graduating course will join the Indian Military Academy for one year for their Pre-Commissioning Training. The ACC cadets commissioned as officers have deep prior understanding of a soldier’s life and have done the nation proud through there varied achievements.
Brigadier Shailesh Sati, Commander, ACC Wing, highlighted the commitment and dedication shown by the Cadets of the graduation course. He appreciated the Cadets for their all round excellence despite prevailing COVID constraints.
The IMA Commandant congratulated the Course for successfully completing the challenging three years of training. In his address, he said, “The degree that you all have just received represents a major milestone in your career and marks the end of an initial, but immensely important phase of your professional life.” He added, “I would like to remind you that former Army Cadet College cadets have excelled and done us proud over the years. They have won the highest gallantry awards, the Param Vir Chakra and the Ashok Chakra, passed out from the Indian Military Academy with the prestigious Sword of Honour and have risen to high ranks. These illustrious predecessors have left an excellent legacy for all of you to emulate”.
The Award Winners of 116 Army Cadet College Wing Course were: (COAS Medals) – Gold Medal, Wing Cadet Captain Atin Thapa; Silver Medal, Wing Cadet Quarter Master Satbir Singh; Bronze Medal, Wing Cadet Adjutant Sahil Thakur.
The Commandant’s Silver Medals went to (First in Service Subjects) Company Cadet Captain Anmol Gurung; (First in Humanities Stream) Company Quarter Master Sergeant Atul Pratap Singh; (First in Science Stream), Platoon Cadet Commander Sahil Verma.
On this occasion, Lt Gen Harinder Singh also awarded the Commandant’s Banner to the Champion, Kargil Company, of Army Cadet College. The Banner is awarded to the Company that excels in various competitions like Sports, Academics, Camps, Debates and Interior Economy. The Commandant also complimented Brigadier S Sati and his team of instructors, as well as Faculty Members for their diligent efforts in shaping the Cadets into potential officers. The Commandant also congratulated the parents and spouses of the Cadets.
Today, the IMA Commandant also pipped three Tajikistani Gentlemen Cadets, who are going for advanced courses in other Indian Military establishments.