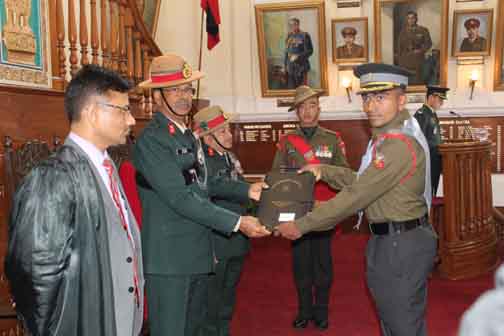 DEHRADUN, 30 Nov: A total of 37 Cadets of the Army Cadet College (ACC) Wing of the IMA graduated today and were awarded degrees during a presentation ceremony held at the renowned Chetwode Hall of the Academy. Amongst the 37 Cadets, 17 are from the Science Stream and 20, the Humanities. These degrees were conferred on the Cadets by Jawaharlal Nehru University, New Delhi.

The ceremony was presided over by Maj Gen JS Nehra, Officiating Commandant, Indian Military Academy. The Army Cadet College has a rich history of training selected personnel from other ranks of all the three Services who have the potential to become officers in the Indian Army. After three years of training at the Army Cadet College, the graduated course will join the Indian Military Academy for one year for their Pre-Commissioning Training.

Dr Naveen Kumar, the Principal of the Army Cadet College Wing, while presenting the College Report highlighted the high standards and commendable academic performance shown by the Cadets of the graduating course. The Commandant, Indian Military Academy, in his convocation address, congratulated the Course for successfully completing their challenging three years of training at the Army Cadet College Wing.

The Award Winners of 112 Army Cadet College Wing Course are:

On the occasion, Maj Gen JS Nehra, also awarded the Commandant’s Banner to the Champion Company, Kargil Company, for this term. The Banner is awarded to the Company that excels in various competitions like Sports, Academics, Camps, Debates and Interior Economy. At the end, the Commandant complimented Brig VM Chaudhari Commander, Army Cadet College Wing, and his team of Academic Department, and the Faculty Members for their diligent efforts in shaping the Cadets into potential officers. He also congratulated the parents and spouses, and extended his felicitations to the future Gentlemen Cadets, also.

Garhwal Post has established itself as a credible, balanced and forward looking newspaper in India. Based in Uttarakhand, the daily is read by the aware, socially and culturally responsible, high-income elite of society.
Contact us: info@garhwalpost.in
https://garhwalpost.in/free-online-dating-site/ local singles sites best dating app