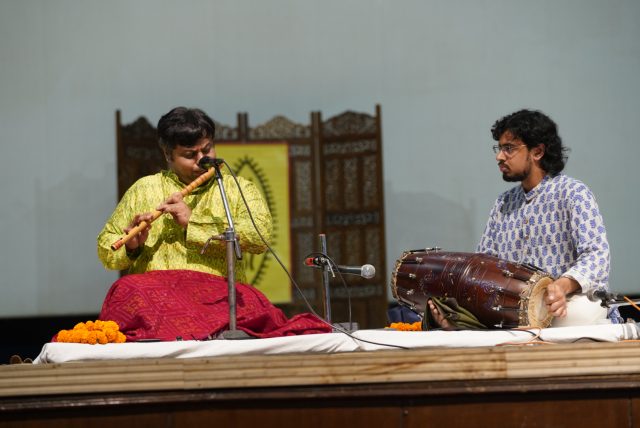 Dehradun, 25 Nov: Under the aegis of SPIC MACAY, Grammy-nominated renowned Flute Maestro Shashank Subramanyam performed for the students of Doon International School and Central Academy for State Forest Service, here, today.
Accompanied by Hariharan Sundarraman on Mridangam, Shashank mesmerised the school students with his music. He covered the history and features of the bamboo flute and uses of different sizes of flute for variations of Ragas.
Shashank is a Grammy-nominated renowned exponent of bamboo flute from India and specialises in Indian classical music. He was a child prodigy and began performing at the age of 6 in 1984. He has performed in the top concert circuits for over three decades. He is the youngest recipient of the prestigious Sangeet Natak Akademi’s Senior Award by the President of India in the year 2017. The BBC world TV did a documentary on Shashank, titled ‘Destination Music’, recently.
Earlier, during his circuit, Shashank performed at Kasiga School and Rashtriya Indian Military College. He will conclude his circuit tomorrow by performing at DSB International Public School and Graphic Era University.